When Thanos’ arrives in Wakanda, Thor could have stopped him courtesy his mighty Storm breaker. The new weapon, which was forged in a dying star earlier in the movie, speared through Thanos’ defense and slammed in his chest. This still gave Thanos a chance to snap his fingers and wipe out half of the Universe, and Thor regretted seeing that because he had aimed knowingly. 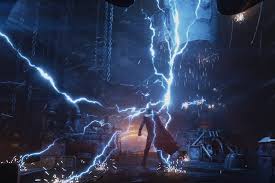 “I would argue that the fan base could be equally upset with Thor, who chose to throw that axe into Thanos’ chest and not his head,” Co-director Joe Russo revealed. “Because he wanted to tell Thanos that he got his revenge.”Thor is not exactly renowned for his wisdom, but, for his impulsive behavior and emotions in MCU. He focused on getting revenge instead of ending the enmity by killing Thanos. Had he gone for a kill shot, that snap would not have happened. These are choices that characters who are feeling immense pain make and hopefully, the audience can learn to empathize with those characters because they can grow through stories, Russo added. “Stories can teach us things and that we should try to see every choice from the perspective of the character that made the choice.”Thanos is also feeling the burden of his actions. “That moment when he clicks his fingers sends him into this ethereal plane inside of the Soul Stone where as part of his quote-unquote hero’s journey in the film, he has one last moment to convey a sense of guilt about what he’s done,” Joe Russo said. “It illustrates what a complicated character he is.”..