Thor killed Hela in Ragnarok, but he snatched her crown in the comic, in order to become King of Hel in the world of Marvel. Hence, with the crown, Thor observed the coming of an exclusive hammer… carved in frozen blood.

The brand new version of Thor comes as a humongous battle spreading across the nine kingdoms in Marvel comic. With the kind of fierce lady that Queen Hela really is and the unwilling attitude of forming an alliance with her brothers and Thor, the hero is left with no option when the realms finally arrive at his doorstep. In case Hela would not merge the crown with Asgard, the hero will take it for himself.

Not only this, it is even more difficult for Thor to resist the upgrade that comes as King of Hel considering Asgard.

This war is only the most recent of all that has been waging ever since Thor re-begun, following the death of Jane Foster, the greatest God of thunder yet. The antagonist of it all is Sindr who is the daughter of Surtur, whom the fans have encountered as the raging God of Muspelhiem in Ragnarok. 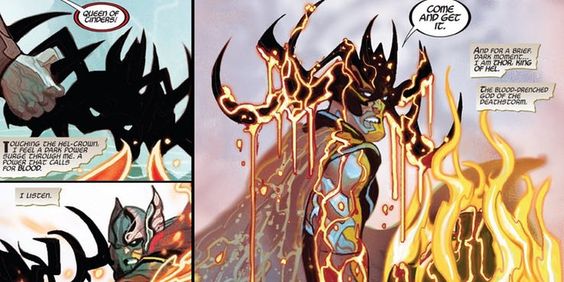 When Surtur fell in the comics, his daughter who is self-pronounced as the Queen of Cinders came forth to avenge this. This revenge on every matter led her fire goblin armies all across the Nine Realms and straight into Thor even stronger than ever.

However, most unfortunately for Sindr, she prepares herself to kill Hel while Thor and his brothers have come together in much anticipation of her murder. This decision proves to be extremely hazardous when Hela comes to reclaim her title and gets beaten badly. Eventually, these incidents leave Thor with no choice but to battle with Sindr himself.

Once placing the crown upon his head (after it’s struck off Hela’s) even Thor is astonished at the sudden arrival of unending strength and courage brought to him as “The Blood-drenched God of the Deathstorm.” With Mjolnir destroyed for good, Thor has been using an exclusive range of hammers given to him for specific jobs.

Thor brings with himself the accord of the God of Thunder.

When Thor calls for a hammer after accomplishing the crown and declaring his strength, a new hammer is gifted to him in the other hand.

Thor applies his powers to drive home just how distinguished his rank truly is amongst the mightiest gods of Marvel. 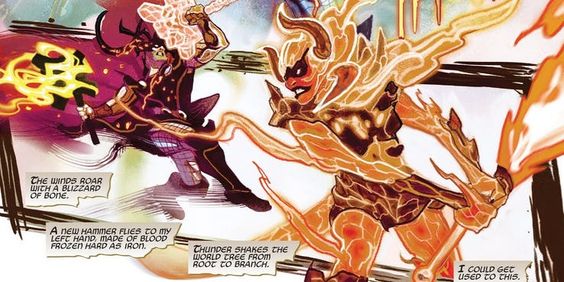 As the Valkyrie recruited by Thor do battle with Sindr’s goblin armies, Thor doles out a beating to the Queen of Cinders directly. Ultimately, the Queen is left with no option but to yield and create a running retreat.

No matter how exciting the power may seem, yet it is temporary in nature. Such is the way with weapons of cosmic importance obviously, and Thor must mandatorily return the crown to the person it rightfully belongs. Although this story of Thor is over, we had never so hoped for the same Thor story to stand out in Thor 4 as much as we do now.

The manner of Thor feeling grateful upon receiving his powers of lightning seems incredible. However, crowning himself as King of Hel is something audiences will not forget.