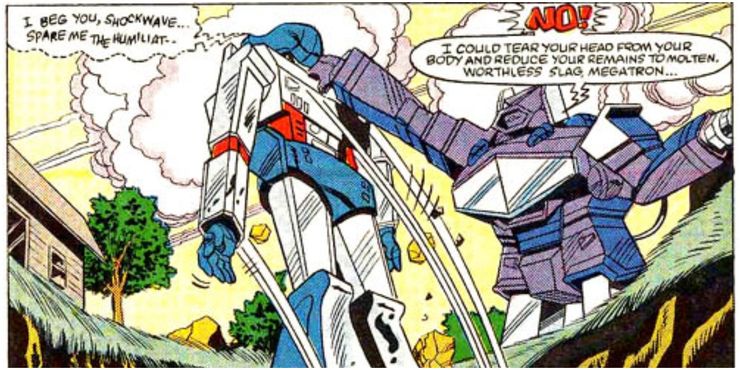 The comic books from the early days of the Transformers franchise were never kind to Megatron and his legacy. Most of the times, he was shown to be a push-over and grossly incompetent. After the Autobots gave the Decepticons their most humiliating defeat in Transformers #4, Shockwave takes away the command of Decepticons from Megatron and he is relegated to a secondary, or even a tertiary role. Other Decepticons like Scorponok were pushed to a more central role. Megatron seemed to just fade away into obscurity. 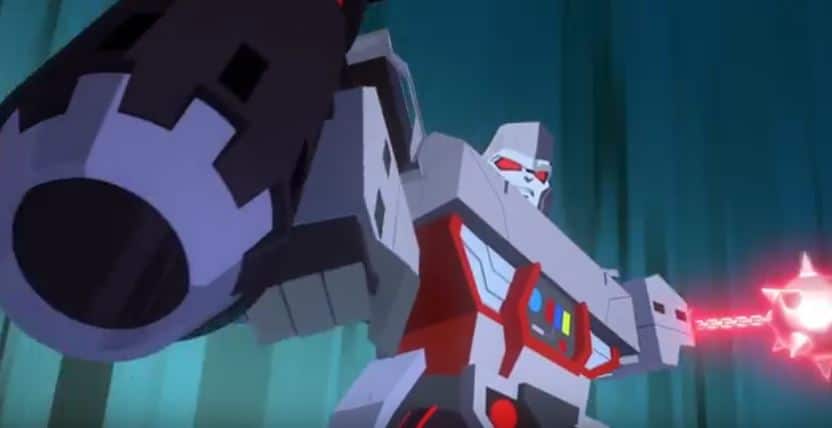 Transformers: Cyberverse just recently concluded its third season. It features a very unimpressive iteration of Megatron. Having appeared only in flash-back sequences throughout the first season of Cyberverse, Megatron and his Decepticon army land on Earth to rain down hell-fire! He is quickly dispatched by a traitorous Starscream in season 2. Season 3 shows the Quintessons attacking Cybertron. The Decepticons and the Autobots unite to stop the new threat. Megatron is never really shown in a light we would like him to be shown in. 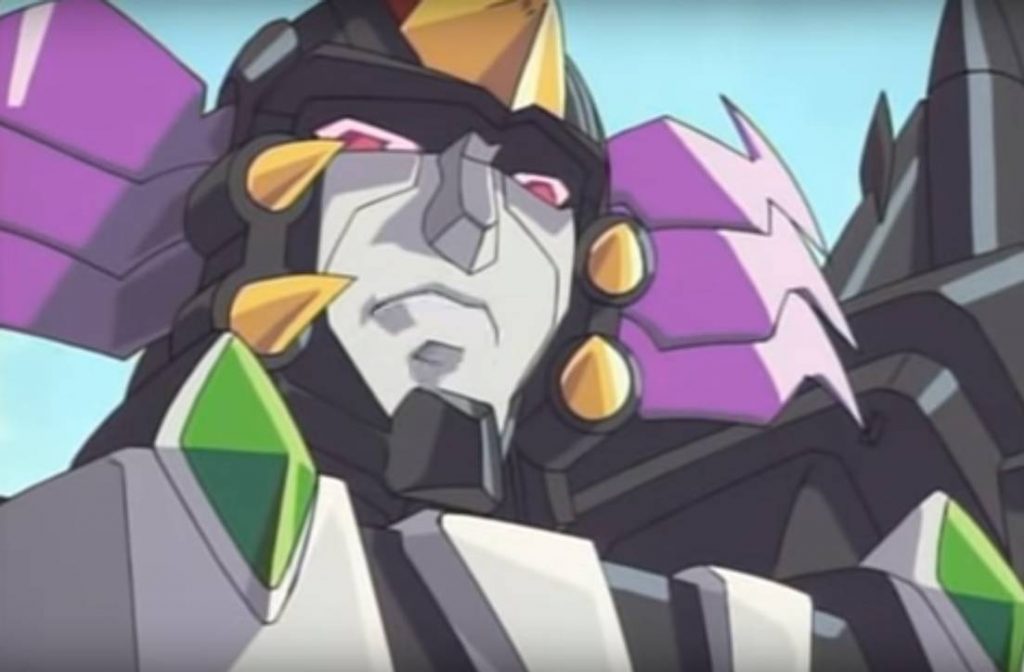 The Robots in Disguise Megatron had trouble getting into the nitty-gritties of leadership. Rarely getting to the battlefield, he would rather employ his stooges, henchmen, and minions to get the job done. This version of Megatron was a coward who would never opt for trading fists, which is totally unlike the Megatron we knew and loved. The design of this Megatron also spoke volumes no how little time the show’s animators had given to character conceptualization. Last but not the least, Daniel Riordian did a bang up job on bringing down the overall tone of the series with his take on the Decepticon leader. 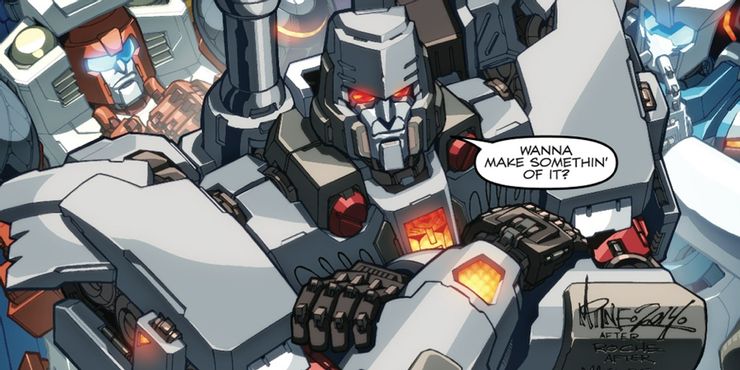 IDW Comics tried their hand in making a Transformers comic book series by taking inspiration from Marvel and DC Comics. They created more fluidly designed characters that would look within a comic book issue. The Megatron they came up with was not just scary in terms of appearance but also exceedingly powerful in terms of combat prowess. This version of Megatron did not just defeat Optimus Prime singlehandedly but also hunted down all pockets of Autobot resistance throughout the galaxy. He invaded the planet of Earth and laid waste to the human civilization. In the end of the series, Megatron has a change of heart and receives a “spark”, becoming an Autobot. 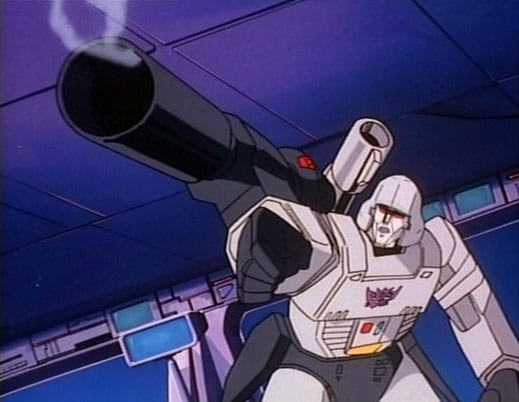 While we know everybody loved the original series, there were some massive flaws in the animated show that look as glaring as they could if viewed through a lens from the present times. Megatron looked more like a Saturday morning cartoon villain scheming in the same manner like a villain of the day in a superhero show. Consistently failing even though he was sure his plans were ‘fool-proof’, he would then start blaming his own troops for the failures and act more like a dirt bag than a leader. After he became Galvatron, we went legit insane and even the Decepticons thought he was a liability. 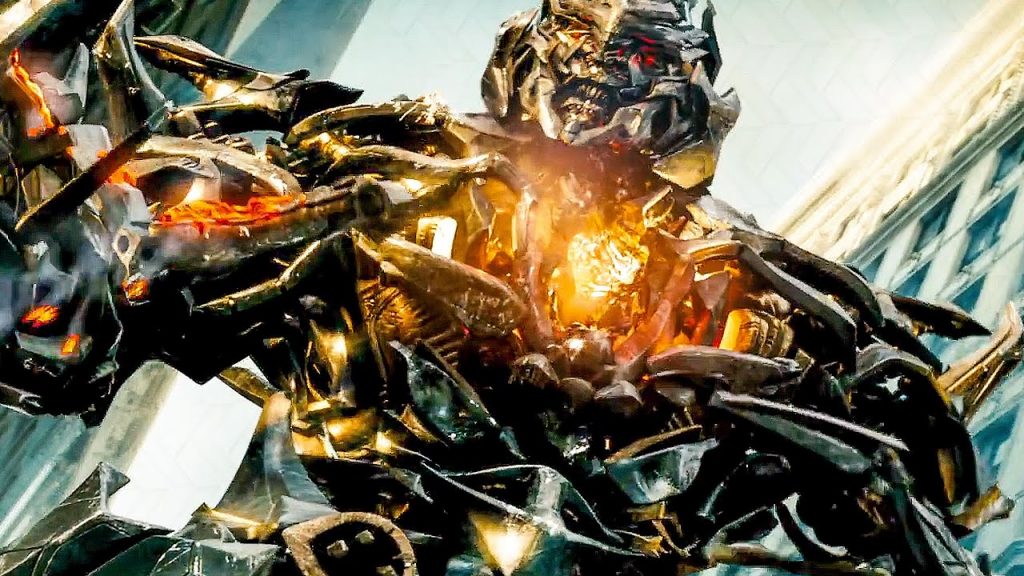 Michael Bay took the successful Habsro franchise and gave it a total do-over. The movie series took the stakes sky high, launching the Transformers universe within a love action setting. There were more menacing looking decepticons, deadlier weapons, more exploration of the Transformers’ history, and of course a more evil Megatron who actually looked more sinister than his animated counterparts. Granted the Bay-hem which helped lift the franchise during its early years led to the movie franchise’s eventual downfall, the Bayformers Transformers movies did give us a very good look at an actual nefarious Megatron. The reason he does not score higher on this list is because the subsequent Michael Bay movies made him more of a secondary villain. 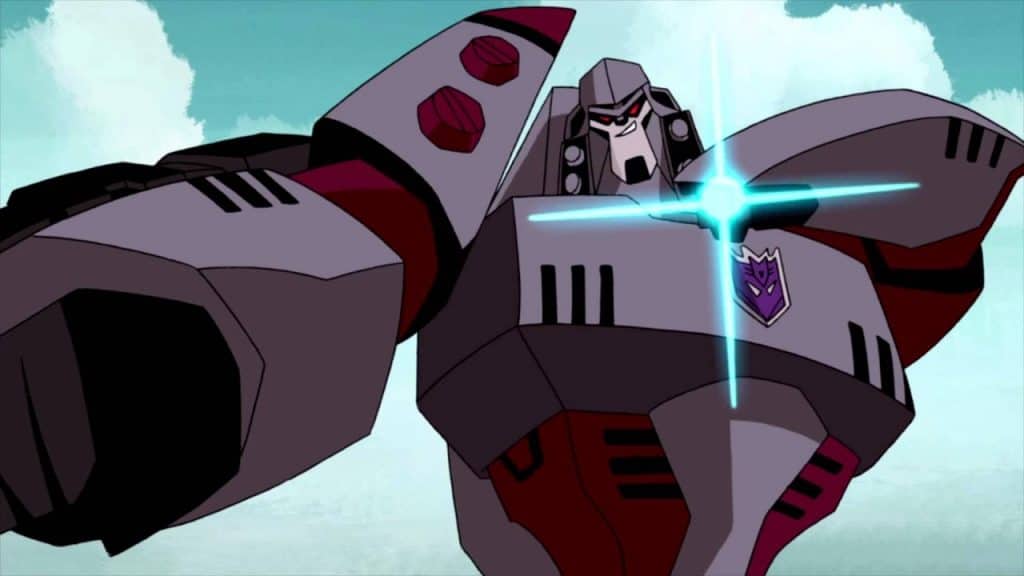 In Transformers: The Animated Series, Megatron was backstabbed by Starscream in quite the literal sense. Megatron then spent most of the first season as a decapitated head and under the care of Professor Isaac Sumdac. The former leader of Decepticons showed why he is the true leader of the evil Transformers faction. Subtly manipulating Sumdac, he would pull the strings from the shadows, making the life of Autobots a living hell. In the season finale, Megatron got his body back and promptly destroyed Starscream the traitor. This version of Megatron also scores brownie points for his martial arts prowess. He singlehandedly took down scores of Autobots by him-self. Corey Burton also did a splendid job lending his voice to the character. 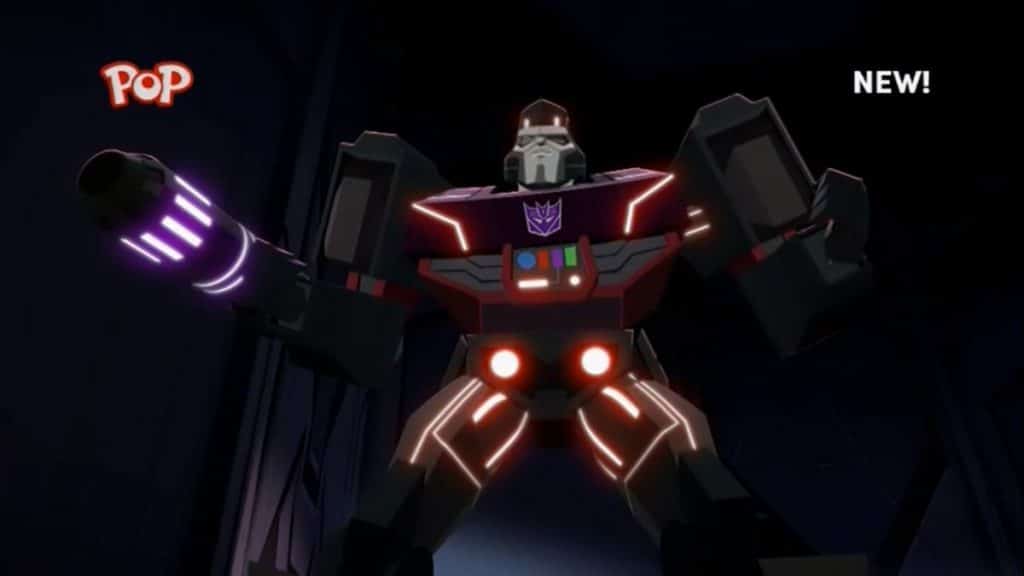 Cyberverse Season 1 showed us the least favorite version of Megatron. But in the finale of the second season of the series, we were introduced to the almighty Megatron X. Cyberverse introduced us to the concept of alternate realities and planes of existence. Megatron of the original reality took a trip into the Multi-Verse and returned with the Matrix of Leadership. The Matrix was stolen from a Transformer referred to only as “The Other One”. The Other One turned out to be an evil Megatron from another reality who had killed Optimus Prime in his universe, exterminated the Autobots and came to the Prime reality to kill this universe’s Megatron. He was later taken down with the help of Windblade’s psychic powers. 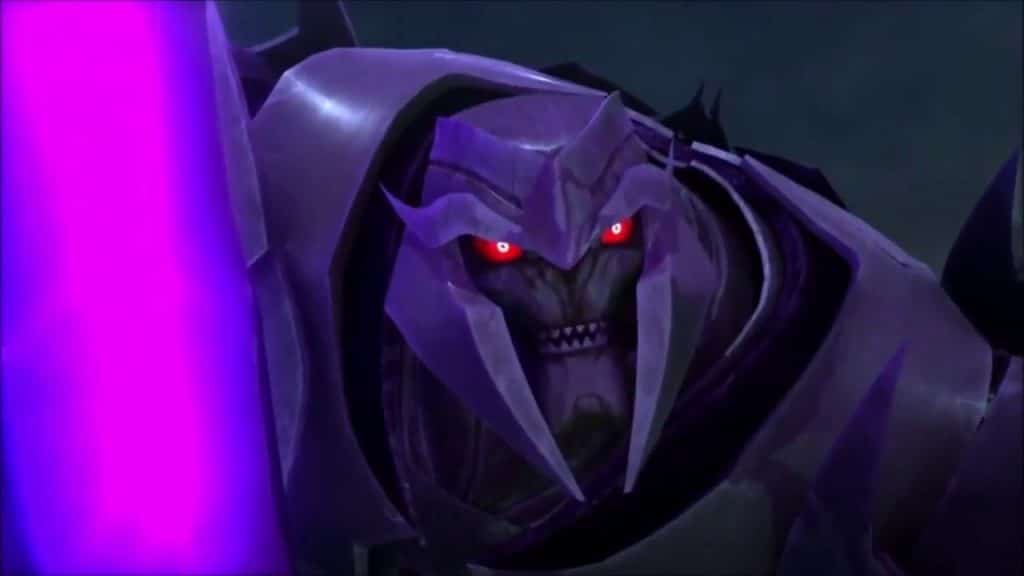 The Prime Megatron is easily the scariest Megatron version in this list. Frank Welker returned to play the part in Transformers: Prime. It had been two decades before he had returned to a Transformers project. By that time, he had refined and honed his voice-over skills to near Godlike perfection. The scariest aspect of the Megatron of Tranformers: Prime was his deep bass voice. When Megatron spoke, he spoke in a toned down whisper which would send chills down anybody’s spine. Prime Megatron was no joke either. He had been a gladiator all his life, having bested Optimus Prime as well as a mighty Insecticon warrior.  His grim jagged smirk only complemented his look and appearance.

You May Like: Black Panther: 5 Things the Comic Book Version Did That We Liked (& 5 We Didn’t) 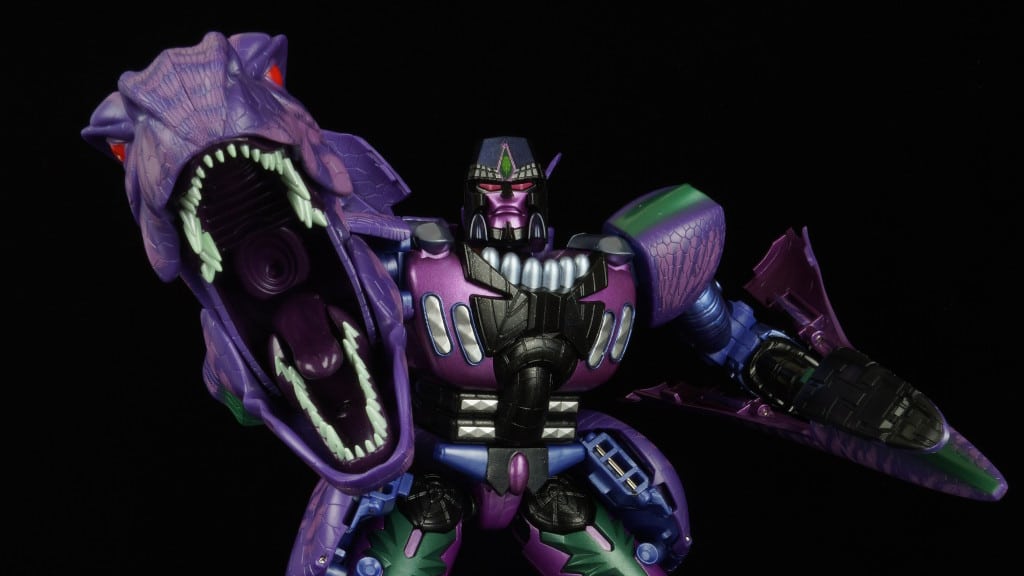 In the Beast Wars Universe, Megatron was a mere criminal. His flamboyance and arrogance pushed him into taking a moniker worthy of his supposed ‘stature’. The Megatron of this reality was no push-over. He acquired the powerful Golden Disk and went back in time to leave his future counter-part instructions on how to change the timeline and rule the universe. He had very limited troops and resources but proved his strategic and leadership skills by scoring devastating victories on the Autobots. He was responsible for the death of Optimus Primal as well as the G1 Optimus Prime. In the not so successful sequel to Beast Wars titled Beast Machines, Megatron intended to absorb all the sparks from all the Transformers of his reality, becoming the One True God of Cybertron.