Sony has created havoc with their trailer of Venom: Let There Be Carnage! No one thought that a movie based on villain without any superhero especially when the hero is the neighbourhood friendly Spider- Man.
They realised a brand new trailer and that just gives all the fans a sneak peek at Carnage’s girlfriend; Shriek and her amazing powers of sound manipulation.
Of course we have some more insight into Carnage but also Shriek.

Sony Pictures Entertainment released a second trailer for the all new upcoming Venom sequel movie along with the tagline , “You are what you eat.”As fans are thoroughly enjoying all new trailer, they are also given a glimpse into Eddie Brock’s hard struggle in order to tame Venom’s predatory nature and a sneak peek at the brand new character ( the one comic book lovers are aware of ) and giving the movie fans a very great look at some of her sonic powers.

During the very beginning of the trailer, Brock is seen telling venom that he really needs to control his eating habits or he will get hauled off into Area 51 (we would want to see how that would go, to be frank )
As he says this, there are shots of a maximum- security asylum called Ravencroft.

And fans are delighted to finally know about this asylum!
This asylum has some really scary history and has been set on fire quite a number of times by the criminals who are hatching plans to escape and get some revenge not only on the superheroes but also the world.

The asylum houses superhuman criminals and in the trailer, fans are introduced to one of its infamous patients.

The woman shown screaming in a glass cage appears to be Carnage’s comic book girlfriend; Frances Lousie Barrison who is famously known as Shriek.
Her origin story has remained a mystery in the comics for a long long time.

However, it was revealed that as a child, Shriek was abused by her mother for being overweight which lead her to abuse drugs and worse; become a drug dealer.
She was shot in the head by a police officer and placed in Cloak’s Darkforce Dimension, which ultimately awakened her mutant powers- the manipulation of sound. 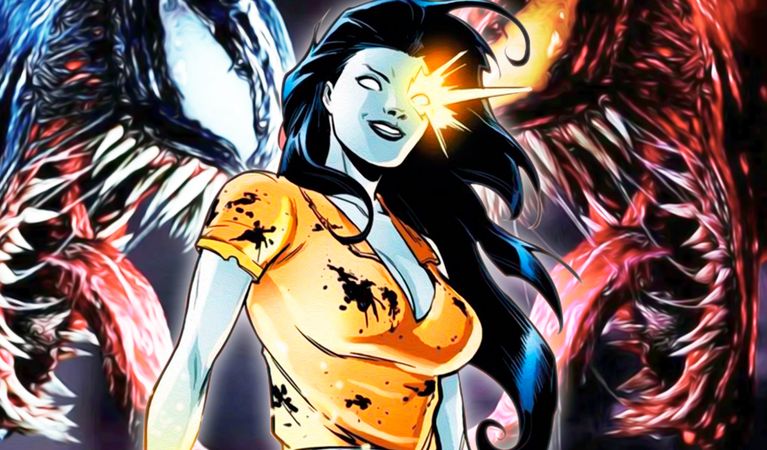 Shriek was originally introduced in the Maximum Carnage crossover where she was incarcerated at Ravencroft. Carnage, who was also imprisoned there, met her during his violent escape and helped free her. They came together to join forced and went off on a killing massacre spree which eventually ended up attracting other supervillains such as Demogoblin, Carrion and even Doppelganger.

They created a makeshift criminal family, with Carnage and Shriek as the parental figures and other villains as their sons.
Throughout the comics, it was evident that Shriek had started dearly loving Carnage and there were few hints here and there; that the feelings were mutual.

In the movie Venom: Let There Be Carnage, Shriek is set to be played by Naomie Harris and the new trailer shows us a glimpse at her mutant transformation.
And towards the end of the trailer, Carnage is dancing outside of Ravencroft singing. “You Feel Like Home To Me”and there is also a shot of Shriek screaming while driving a red car.
Looks like Shriek is out of Ravencroft all thanks to Carnage!