During Comic-Con International in San Diego, HBO finally released a full-length trailer for its highly-anticipated Watchmen television series. Before this, the series’ marketing videos were brief and cryptic, and they only led to more questions. However, the Comic-Con trailer not only gives us some answers, it promises a dark, dense and thoughtful trip back into the gritty universe of Alan Moore and Dave Gibbons’ original comic series.

HBO’s Watchmen series is not an adaptation of the comic book. Instead, it has been described by series creator Damon Lindelof as a remix of the original comic, as well as a sequel. The television series picks up years after the conclusion of the comic but, as its lead villain Adrian Veidt/Ozymandias foreshadowed decades ago, nothing ever ends.

Here is a rundown of everything we’ve learned from the first Watchmen trailer.

The RETURN of… Hooded Justice?

Right off the bat, the Comic-Con trailer debuts with quite a surprise: someone wearing the superhero costume of Hooded Justice crashes through a storefront window to foil a robbery. Then, we find out that the Hooded Justice’s heroics are actually being watched on television by a new character named Looking Glass.

Hooded Justice was one of the original masked heroes of the Watchmen universe. As part of the Minutemen, the character fought crime in the late 1930s, and eventually disappeared when the government voted to outlaw masked heroes. The character mainly appeared in flashback sequences of the original comic, and as part of the rich history of its universe.

Given that it’s highly unlikely Hooded Justice would be alive and fighting crime in the present day of HBO’s Watchmen, it appears as if Looking Glass is watching an in-universe television show starring Hooded Justice.

Where is Adrian Veidt?

We’ve known for some time now that actor Jeremy Irons would play Adrian Veidt on the television series. Veidt was the evil mastermind of the original Watchmen. Using his vast wealth and resources, the former hero, also known as Ozymandias, launched an attack on New York that appeared to be alien in origin in order to rally all of the world’s nations under one cause. However, thanks to Rorschach, Veidt’s machinations were eventually made public.

So where is aging villain now? In the trailer, we see someone read a newspaper article, the title of which reads: “Veidt Officially Declared Dead.” However, we later see him alive and well, celebrating an anniversary in what appears to be a lavish room. Seemingly up to his old tricks, Veidt can also be seen activating an explosive device, and plotting behind the scenes. Clearly, Ozymandias isn’t done yet.

The cult of Rorschach 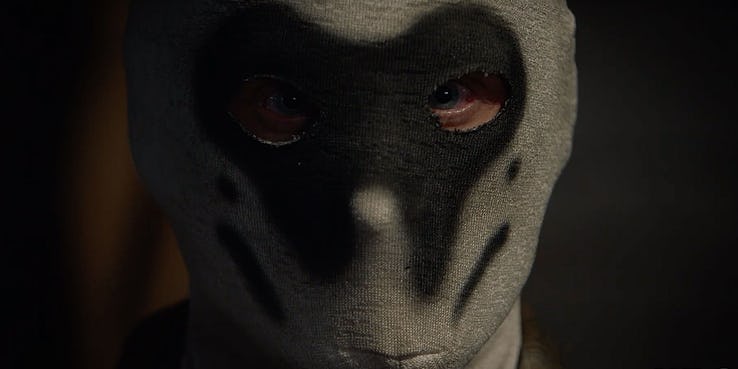 Watchmen‘s teaser trailer first introduced the mysterious cult of characters wearing Rorschach-inspired masks. Chanting an ominous “tick tock,” they appeared to be a dangerous presence on the series — we just didn’t know how much. Well, the Comic-Con trailer shows us that they are incredibly dangerous

Using masks to hide their identities, this cult coordinates an attack in Tulsa, Oklahoma, against every member of law enforcement. The attack appears to be severe, and its fallout leads to the police force wearing masks to protect the identities of its officers. The cult appears to follow Walter Kovacs’ original mantra to fight the system with brutal methods, but they are taking it further than ever before, and seemingly twisting it for their own agenda.

However, like the original comic, this still has us asking: who are the good guys, and which are the bad ones? 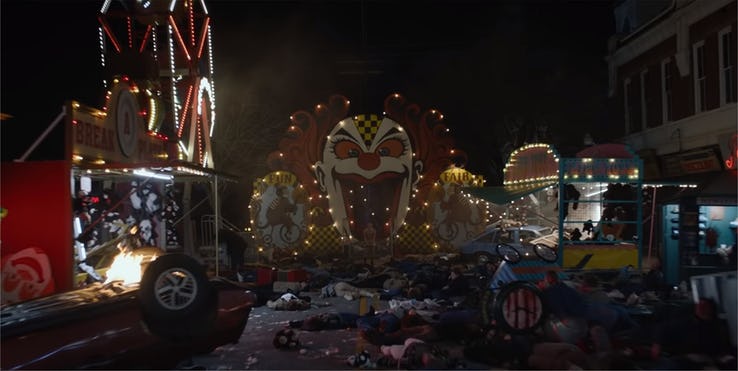 Adrian Veidt is believed dead, but secretly in hiding; Rorschach-mask wearing citizens are taking up arms against law enforcement; police officers are wearing masks, and taking law into their own hands to the point that they are being compared to vigilantes; a terrible massacre takes place in a carnival. Like the original comic book, HBO’s Watchmen presents a pressure cooker of a situation that can’t lead to anything good.

In fact, in the trailer, a character warns that there is a new, insidious conspiracy currently unfolding. But what is it, and who is behind it? Is it Veidt, manipulating events yet again, or is someone else pulling the strings?

Alan Moore and Dave Gibbons’ Watchmen is a multilayered opus. Each read-through offers new details, new clues and new nods to the entire story. In fact, the series had a visual language of its own, one that offered plenty of clever references that mirrored the events of the story. Whether it was visual callbacks to the Comedian’s smiley face button or the idea of time and clocks, the comic series was filled with these visual cues that nourished the overall narrative.

The Comic-Con trailer reveals this visual language will also be present in the television series. The trailer gave us plenty of these visual cues, from Looking Glass eating beans just like Rorschach and egg yolks forming a smiley face, to a clock ticking midnight and a young man surrounded by bodies in a carnival, evoking the comic series’ New York massacre.

And we’re certain that the television show will be filled with plenty more.

In the Watchmen universe, Dan Dreiberg took on the identity of the Nite Owl to fight crime. But Dreiberg didn’t just take to the streets — no, thanks to his flying Owlship nicknamed Archie, Nite Owl also took to the skies. The airship was equipped with plenty of weapons, and its advanced technology helped Nite Owl in his vigilante activities.

The Comic-Con trailer indicates Archie will make a return. Well, the Owlship, at least. In the night sky, the ship flies, and even shoots fire. If this isn’t Dan’s own ship, then it could be a new version or prototype designed by someone else. If not, then there is someone on the series who found the Nite Owl’s old ship.

Whatever the case may be, we might find out what happened to Dan after the events of the original comic.

If there was any doubt that HBO’s Watchmen would dare address the big, blue elephant in the room, then the Comic-Con trailer put those worries to rest. At the start of the trailer, we see a parade unfold, which appears to be held in honor of Doctor Manhattan. People are wearing blue masks, and a paper-mache replica of the character is paraded around. But it doesn’t stop there

Not only is the character mentioned by name, we also see video footage of the glowing blue god on Mars. At the end of the Watchmen comic, Manhattan said that he would be leaving this galaxy behind to create some new ones. However, it appears as if he has now returned. In fact, the final shot of the trailer features someone, whom we only see from the back, reach their blue hand down to pick up a Doctor Manhattan mask.

The implication here is that, yes, Doctor Manhattan has returned. Unless you know someone else in the Watchmen universe who has blue hands?