The Tournament of Power

The story revolves around the Tournament of Power. The tournament gives a place for the human Z fighters to show their skills and fight with interdimensional opponents. The human participants include Tenshinan, Krillin, and Master Roshi. Goku and Vegeta are at war with the wizard Moro, and this has escalated things quite a bit. So, it’s time for the human fighters of Earth to defend their home. Tien, Krillin, Chiatzou, Roshi, and Yamcha are all in the scene. However, Roshi and his student Krillin have paired up to fight some of the Moro’s henchmen. This is when the Turtle Sage gives his student a piece of advice for a lifetime! 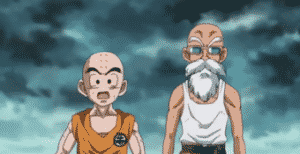 The Galactic Patrol has enlisted the Z Fighters currently located on Earth. Legendary warriors like Piccolo and Gohan have decided to split up and fight against Moro’s incoming henchmen. Krillin and his teacher Master Roshi plan to take up the fight together. But when Master Roshi sees the army, he says to Krillin that he has to stop depending upon his old master and can handle things on his own. Fun fact; the army consists of attractive female warriors, and Master Roshi could not control himself. He left Krillin to fight an enormous bear-like underling of the current threat to the galaxy.

Krillin and Master Roshi: The History

Krillin was first introduced to the pervy, old master in the original Dragon Ball series. The bald Z fighter trained alongside Kakarot, aka Goku. Gradually both of them became the best of friends. Though Goku advanced in skills and powers, it is good to see Krillin and him fighting side by side.