Behind every kick, punch, and POW! is a hardworking stunt double who is responsible for bringing the astounding exploits of superheroes and superhumans to life. Due to physical constraints or contractual commitments, the actors hired as superheroes must stand aside and allow these physically imposing professionals to serve as their stunt doubles. Actors want to undertake as many of their own stunts as possible because they understand the prestige that comes with executing the complicated job that they accomplish. Stunt doubles practice martial arts, acrobatics, and bodybuilding, and they frequently add racing in automobiles and motorbikes to their repertoire of abilities in order to enhance their chances of working on major franchise films. Some are chosen because they bear a remarkable likeness to the stars they would be duplicating, while others are chosen for their diverse range of talents. Many of them are performers in their own right who are also well-equipped to do their own stunts if necessary. Whatever their credentials and talents, the seven stunt doubles on this list all have one thing in common: they’re all just as attractive as the superstars they mimic! 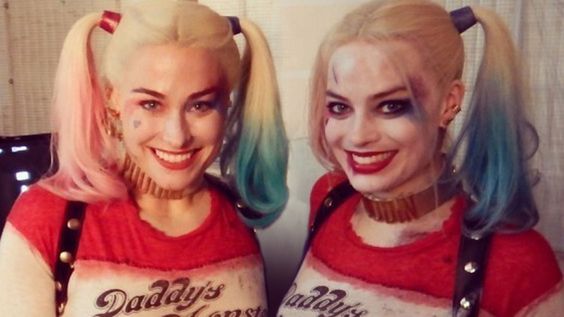 Ingrid Kleinig has worked hard to reach the pinnacle in her career. Despite her movie star beauty, this tough woman understood she was destined to seek adrenaline. In fact, she told The White Space that when she was a baby, her brother used to take her on motocross jumps. This led to a long trip through some of the more forgettable Hollywood films of the previous 10 years, like Cops LAC, Panic at Rock Island, and Sea Patrol, before Kleinig broke through with The Hobbit: An Unexpected Journey. Still, if she’s had a defining role, it’s as Margot Robbie’s stunt double in Suicide Squad. Robbie is a classically trained dancer who is at ease in her own skin, and the two became friends while doing stunts for Harley Quinn. Under the guidance of free-diving instructor Kirk Krack, they even staged a long-running competition to determine who could hold their breath the longest underwater. In the end, they both surpassed the five-minute mark and defeated all challengers from the crew who attempted to take them out. 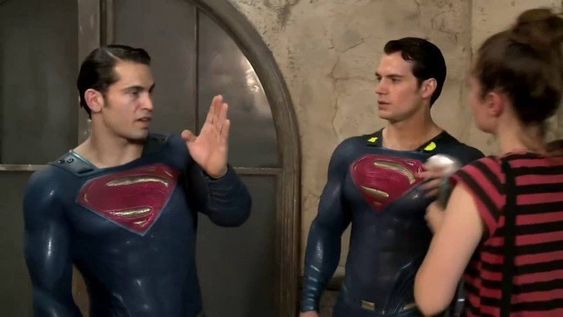 After a long day of taking a beating, jumping from buildings, or being set on fire, these stunt performers must take consolation in the knowledge that they are paid to pretend to be superheroes. That has to assist with achy joints at the end of the day. And that goes double for Albert Valladares, who began practising wrestling manoeuvres in his backyard with friends, since Valladares was given the opportunity to play not one, but two of the greatest comic book characters in history. Valladares spent his time double for both Superman and The Dark Knight in Batman v Superman: Dawn of Justice. And, given his moniker “Spider,” we can only assume he has at least one more superhero in his future.

5. Will Erichson is Deadpool: 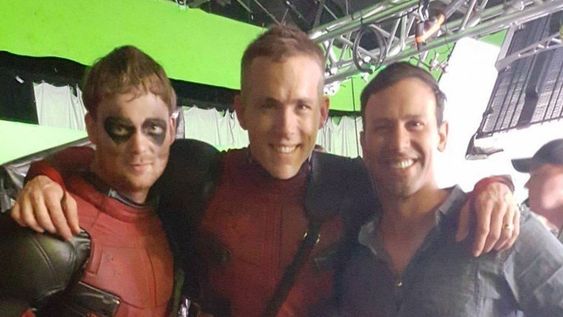 Will Erichson has amassed an impressive Hollywood stunt resume, acting in films ranging from TRON: Legacy to Wayward Pines. Erichson had a huge break in 2016 when he was cast as Ryan Reynolds’ stunt double during the production of Deadpool. Erichson, along with other Deadpool stunt performers Adrian Hein and Alex Kyshkovych, contributed to the big screen debut of our favourite regenerating degenerate. Erichson was very important in the SUV battle scene at the beginning of the film. You can also find him on the set of Arrow, where he does stunts for different cast members, most notably John Barrowman (Dark Archer). 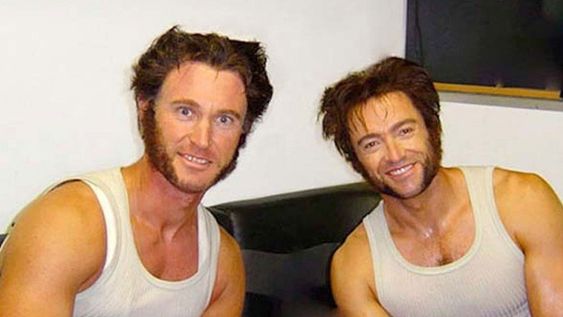 Richard Bradshaw’s astonishingly prolific stunt career on television and the big screen spans over three decades. He’s also trained as an actor, so he can meticulously replicate moves so well that you’d never guess he’s not the actor he’s double for. His work has appeared in films such as The Fifth Element, Titanic, and Tomorrow Never Dies. Bradshaw, like Buster Reeves, has been engaged in Game of Thrones production, acting as both a performer and the show’s assistant stunt coordinator for more than two dozen episodes. Bradshaw (shown on the left) served as a performer and stunt double for Hugh Jackman in X-Men 2, The Last Stand, and X-Men Origins: Wolverine, and Days of Future Past. 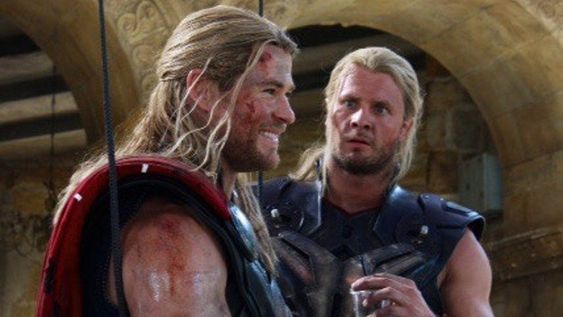 Bobby Holland is a professional baseball player. Hanton is one of Hollywood’s most sought-after stuntmen, having worked with Daniel Craig in Quantum of Solace, Christian Bale in The Dark Knight Rises, and Ryan Reynolds in The Green Lantern. But if there’s one role he’s most proud of, it’s being able to deliver thunder as Thor across the MCU. Hanton adores everything about this role, especially star Chris Hemsworth, whom he describes as a legend to Business Insider: “Chris is in the greatest form of any actor I’ve seen.” He has massive arms and excellent coordination. I’ve never had to exercise for three hours a day, twice a day, six days a week in my life. If Chris wasn’t an actor, he’d be one of the best stuntmen in the business. ” And Hanton has had plenty of opportunities to demonstrate his prowess in Asgardian armor, but his favorite stunt? “I have to climb out of the jail he’s in and jump, miss the landing, plummet 100 feet, and crash into the opposite wall,” says Bane in The Dark Knight Rises. It was one of my first high-falls, a 100-footer, which is an impressive achievement for a stunt performer. ” 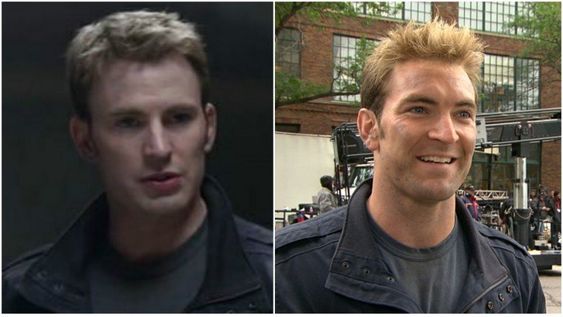 It’s a wonder this stunt double isn’t a comic book character himself, with a name like Sam Hargrave. But he doesn’t have an alter-ego, much less a real-life ego. According to Hargrave, “I’m here because I’m disposable. In all honesty, it’s because I can be replaced if I am harmed. ” While Hargrave’s modesty is welcome, he is far from disposable as a stunt team hero. When he’s not playing Captain America, he’s Marvel’s resident stunt coordinator and choreographer, responsible for some of the most spectacular blowouts in Captain America: The Winter Soldier, Captain America: Civil War, and Avengers: Infinity War. If one of your favorite Marvel superheroes gets a knuckle to the face, Hargrave is almost certainly to blame. 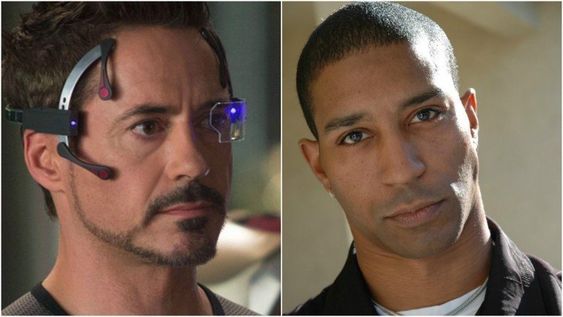 Samuel L. Jackson was the first to reveal a little secret to the public, tweeting back in 2012, “For all the women who need an excuse to watch # Avengers, here’s Brutha in the Ironman costume. Greetings, Clay Fontenot! ” In reality, Robert Downey Jr. seldom wears the outfit these days. He doesn’t frequently have a reason to, what with CGI and stuntmen. Fontenot is the only one who still has to put on a suit while the cameras are rolling. Fontenot has a lengthy list of blockbusters under his belt, including Quentin Tarantino’s Django Unchained, Unstoppable, and the Blade films, so you have to believe he enjoys his role as the body to Downey Jr.’

So, yes, these are the 6 Stunt Doubles Look Like. Well, these are the heroes of real life who risk their lives to do difficult stunts, and they even get recognized for it through awards. So what do you guys think about these stunt doubles? Please tell us your thoughts on these moments in the comments section below. For the time being, keep reading Animated Times, the perfect place to get a closer look at the entertainment industry, upcoming movies, TV series, celebrity gossip, and much more. We’ll have you covered. Keep reading animated times, guys, for more.