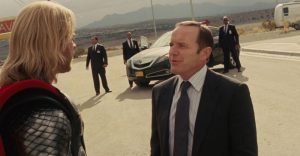 After he died in The Avengers, S.H.I.E.L.D. Agent Phil Coulson remained absent from subsequent MCU stories. While the character had an extraordinary contribution in Marvel’s Agents of S.H.I.E.L.D., it is expected that he could appear in Marvel’s upcoming animated series What If…?.

As per the caption that Clark wrote while posting What If…?‘s trailer, “Marvel Studios’ first animated series, @OfficialWhatIf…?, starts streaming August 11 with new episodes Wednesdays on @DisneyPlus. You never know who might show up” there is a strong hint and possibility that Colson might show up in one of the timelines in the series.

What If…? is going to be released on August 11 this year with around 10 episodes in its first season. Marvel also announced that it will be based on exploring Multiverses with a foundation of MCU’s 23-year journey. Overseen by Uatu the Watcher, this series is inspired by the comic series named What If…?. Uatu the Watcher “observes all that transpires here” but is forbidden from disrupting any timelines. 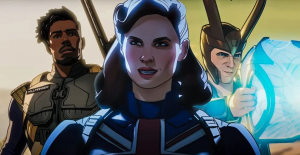 The trailer also provided a glimpse of Peggy Carter becoming a superhero and a Marvel Zombie world. What If…?‘s trailer teased the MCU fans by showing a glimpse of Killmonger saving Tony Stark. Even Dora Milaje also found to be fighting the Scarlet Witch. On the other hand, Loki seems to be confronting Nick Furry with an Asgardian Army.

While it is expected that Phil Coulson might appear in What If..?, there is no confirmation of Gregg’s involvement in the series. Gregg’s last appearance was seen in Captain Marvel, where he played a younger version of his character. Been a crucial part of MCU since Iron Man, Gregg united with Nick Fury in Captain Marvel when Skrulls arrives on Earth.

Gregg even played a role of an alien doppelganger, Sarge in Agents of S.H.I.E.L.D. Season 6 and a Life Model Decoy of Coulson in Season 7. Even the final Season has been narrated in a similar space-time where Coulson and his team travel through history to save S.H.I.E.L.D.’s existence from the Chronicoms.