Scarlet Witch is arguably the most powerful Avenger in the MCU. Her powers are not limited to physical prowess but her innate ability to bend reality itself gives Scarlet Witch a power unmatched by others on the Avengers’ team.

In a Q and A at the New York Film Academy, The president of Marvel Studios, Kevin Feige, confirmed Wanda Maximoff as the strongest Avenger ranking her above fellow Avengers like Hulk and Thor. Curiously, Feige’s claim means that Wanda is stronger than Captain Marvel, played by Brie Larson. Who was previously considered the Strongest Avenger in the MCU.

Powers of The Scarlet Witch

Scarlet Witch was introduced to The MCU in Avengers: Age Of Ultron with her deceased brother, Quicksilver. Wanda received her powers from the mind stone, allowing her to use telekinesis and plant visions into people’s minds. Gradually her powers expanded from telekinesis to manipulating psionic energy. Allowing her to levitate, emit psychic energy blasts, and cast force shields. The extent of her powers was clearly seen in the Avengers Infinity War when she unleashed her powers onto Thanos. Thanos had to resort to opening fire on his own army to create a distraction allowing him to Escape Scarlet Witch’s wrath.

Scarlet Witch could have single-handedly killed Thanos, which is why Feige now champions Wanda as the heaviest hitter on the Avengers team. Now, this could merely be a savvy trick to hype up Scarlet Witch for her upcoming TV series WandaVision on Disney plus alongside Vision. The title of the strongest Avenger is what Thor clings to, but in Wanda’s case, the strongest does not refer to physical might. Wanda could never be physically stronger than Hulk, Thor, or Captain Marvel. However, the power that she does possess allows her to supersede and exceed her fellow Avengers abilities.

Will she become even stronger? 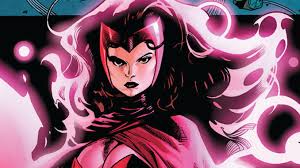 Wanda’s powers can manifest in numerous ways. But her true might is how she potentially has the ability to affect reality itself. This power is beyond Thor’s power of lighting or Captain Marvel’s binary powers. As Wanda can attack her enemy on multiple planes. Both the physical and the psychic planes. The MCU film franchise has only scratched the surface of what she is actually capable of doing.

In the comics, Scarlet Witch’s power evolved beyond hex magic; when she was mentally distraught in the House OF M storyline, Wanda forged a complete alternate reality. Fans speculate if, in WandaVision, she may have developed the power to consciously control and manipulate reality itself. Since Fiege teased that she is the mightiest Avenger. Phase 4 of the MCU may very well prove his point. Only time will tell what they truly have in store for Wanda.

What do you guys think? Do you agree with Kevin Feige? Do you think Wanda is stronger Than Captain Marvel?  Comment down below.