Riverdale a popular teen show that premieres on the CW, the show was inspired from Archie Comics with a darker and modern twist, the first season focused on the death of Jason Blossom, with 4 teens Betty, Archie, Veronica and Jughead investigating the town looking for answers

A show like this sounds incredible and season 2 was just as good, but unfortunately season 3 of riverdale was a huge disappointment, not everyone will agree as some are diehard Riverdale fans.

[1]
The old Riverdale, this may seem strange but in season 3 the mystery is a boardgame, most of the character lines were cringy and the second half of the season was a huge let down, in season 2 the gang are trying to figure out who a black hood killer was, Although it wasn’t pure season 1 it was an incredible interesting story. Hopefully in season 4 it won’t focus on supernatural like presence. 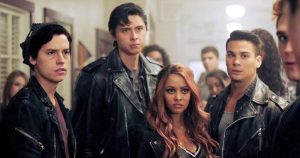 [3]
Jughead and Archie, their Bros until the end and with the first two seasons and the second half of season 3 it felt like it, again unfortunately during season 3 Archie and Juggy don’t have much screen time together, let’s hope in season 4 we can get back the bromance.

[4]
Cheryl Blossom, she wasn’t everyone’s favourite character in season 1, but one thing Season 3 got right is Cheryl’s new personality, caring for her girlfriend Toni while being an epic Archer there’s absolutely every reason to love Cheryl.