We are Venom… The movie was a box office SMASH! grossing more than Wonder Woman, for such an unknown character that’s extremely impressive but there’s so many elements they didn’t mention in the first movie that we all want in the upcoming sequel let’s get started

[1]
Carnage, this one is pretty obvious but it’s important we mention it, Carnage is very similar to venom, and would be epic to see these two battle on the big screen, He was scene and mentioned in the first movie “There Will Be Carnage” 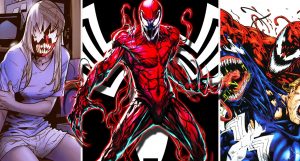 [2]
An R rating, this one is on the more unlikely side but the original script for Venom was intended to be rated R like Deadpool! Unfortunately sony done a few reshoots & editing and gave up a less violent pg13 cut of the film with Tom Hardy stating all his favourite scenes were cut

[3]
Spider-Man, we don’t mean the Web slinger actually showing up as we like him in the Marvel Cinematic Universe, but a mention of Peter Parker would make the movie feel 100 times better, a simple solution is to have a news paper with the Photographer’s name being Peter Parker.

[4]
Annie and Eddie, Annie played by Michelle Williams is the love interest of Eddie Brock, until half way through the movie when she dumped him for investigating her boss, hopefully in the sequel we will see the chemistry with the two and even She-Venom

[5]
A better script, The Sony Marvel Shared Universe has given us 5 Spider-Man films (not including Homecoming), and unfortunately venoms script could of been something much greater but Tom Hardy signed on for a trilogy so Sony has two more chances to give us an epic adventure, the first movie was released in October and with other movies such as Joker using the horror month it’s important Venom 2 needs to be extraordinary to be a critical and commercial successful movie.

I would like to thank Kiara for the idea of this article.