Marvel released their new animated series MODOK on hulu. It is an adult stop-Motion series starring, you guessed it, MODOK. It revolves around MODOK, who fails on his mission to gain control over the world, and is removed from his company AIM, after it falls into bankruptcy. Back to his normal life, he has to deal with his tainting family while facing a mid-life Crisis.

But who exactly is MODOK? That is what we are gonna talk about today.
But before we start with the video, make sure you hit the like and subscribe button.

MODOK (Mental organism designed Only for killing, who was formerly MODOK with a C (Mental organism Designed only for computing), is a Marvel supervillain, with superhuman intellect, and just a Head, Just a head, floating around on a doomsday chair.

Formerly called George Tarleton as a human, he was a lowly american technician at AIM (Advanced Idea Mechanics). He joined the team to help develop a cosmic cube, but was mutated into a human computer by The Scientist Supreme. They gave George a massive brain to give him superhuman intellect, but it made his cranium huge, and with such a huge head and tiny and frail body, he needed a support system. So he was placed inside a life support system called “The Doomsday Chair”. This experiment also gave him a plethora of psychic powers, along with a mission to take control over the organisation that made him that way.
Although, in the beginning, he was called MODOK with a C for computing, as he was used to analyze and probe the cosmic cube. But the scientist did not realise that with such a massive brain, and all these powers, it might come along with superior ambitions. It didn’t take MODOC to turn on his masters, the scientists who made him this way, and overthrow the organisation. He later adopted a new acronym MODOK with a K for Killing, as it suited more with his ruthless killing. 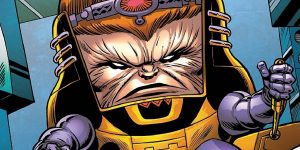 MODOK has a lot of powers and abilities, mostly mental. He has superhuman intelligence, because of his massive brain, for which he had to sacrifice his body. He possesses enhanced intuition, pattern solving, information storage and retrieval and logical and philosophical structuring. He has the ability to predict probable outcomes, by creating tactics and strategies in his head, and his ability to do so, is so strong and advanced that it almost borders on precognition. His ability to predict the future is always correct.
He also has a perfect memory, so he can recall every moment he lived perfectly.

MODOK wears a headband that enables him to shoot energy beams out of it, using his mental power.
He also has telepathic and psionic powers, which means he can contact others through telepathy, mentally control individuals or a large group of people, and create force fields so strong that it can withstand minor nuclear explosions.
His life support system, that is, the Doomsday chair is often covered with deadly weapons which he controls with his mental powers.
Due to his huge head, he often creates proportionally sized humanoid bodies for himself, that’d fit his head, and look a little less funny.

But with his huge head and frail body, comes the curse of his organs wearing out quickly. So to protect himself from that, MODOK has made a large quantity of harvesting clones, from which he can harvest necessary organs when needed, to sustain his life.

There’s also a different version of MODOK, known as MODOK Superior. And as the name suggests, He is exactly like MODOK, but superior. He possesses all the powers and abilities of MODOK, and looks exactly like him, but he does not have any of his weaknesses. 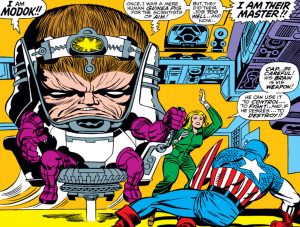 Although this show looks like it focuses more on the Human side of MODOK and not his evil side, that wants to take control of the world, and cause chaos and destruction. Afterall, with a huge brain and great intellect, comes a huge Mid-life crisis. So we are excited to see more of the hilarious MODOK, and we hope this video cleared your questions about who MODOK was? And what are his powers?

Let us know your thoughts in the comments below.