Although the franchise is no Game of Thrones, Star Wars: The Rise of Skywalker will close out the Skywalker-centric saga forever, meaning it’s the end of the road for at least a few characters. Both Mark Hamill and Daisy Ridley have said that they will not be returning for future movies, which begs some questions as to who will die, either with a bang or by biting the dust of Jakku, in this final chapter. Let’s examine the potential victims, and where, how and why it might happen.

The Odds Don’t Look Good For These characters 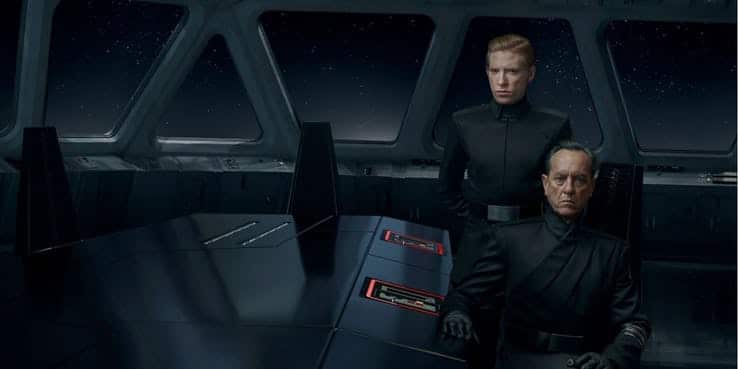 Everyone’s favorite space ham Nazi has been slated to kick it since he destroyed the Hosnian system. Hux is, even at the end of The Last Jedi, still in denial about the kind of story that he’s in. He knows that the Force exists, but he refuses to acknowledge its importance, even as Kylo Ren chokes him. Hux is besieged by deadpan snarkers that openly mock him (Kylo, Poe and a couple of his subordinates), but he insists on acting like he’s incredible. He’s a fascist technocrat, and the only thing standing in his way is the Resistance, which, by the end of The Last Jedi, was nearly wiped out. However, Hux is also emblematic of the First Order, so he has to go for the organization to be truly defeated.

In terms of where and how he’ll die, it seems pretty likely he’ll bite it on one of his beloved state-of-the-art dreadnoughts, which he’s been primarily shown on throughout the films. As to just how he’ll die, it’s possible his death might have to do with Allegiant General Pryde, a character who will be introduced in The Rise of Skywalker, as there will probably be some tension between the two First Order villains. Hux might also fail a coup against Supreme Leader Kylo Ren, which could end up the general’s last treasonous act.

The Knights Of Ren 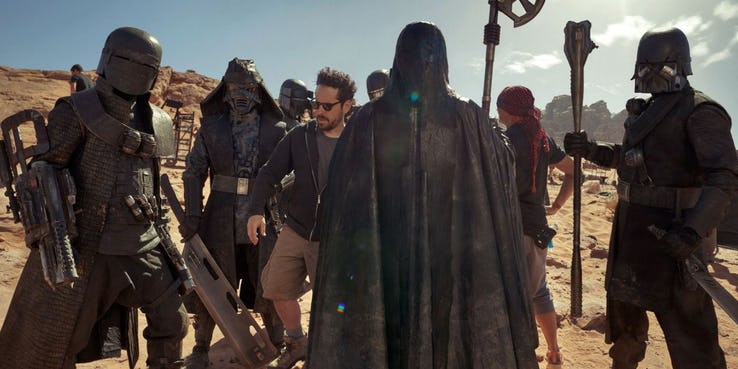 Had Rian Johnson included the Knights of Ren in The Last Jedi, he thinks he would have killed them off in the throne room scene. However, Johnson didn’t feel that it would be fair to dispose of them so quickly after teasing the audience for two movies. This indicates they’re a rather dispensable part of the mythos.

Production photos from the set show the Knights of Ren on the desert planet of Pasaana, so they might meet their end there. However, it’s also possible their storyline could take them to another planet, like Kijimi. How exactly they’ll die is unclear. Although it seems likely the demise of Kylo Ren’s flunkies have something to do with the Resistance and the characters associated with Rey, this might be one of the times J.J. Abrams opts to borrow from previous installments, meaning he could also have the First Order turn on these Dark Force users the same way as the Clones did the Jedi in The Revenge of the Sith. 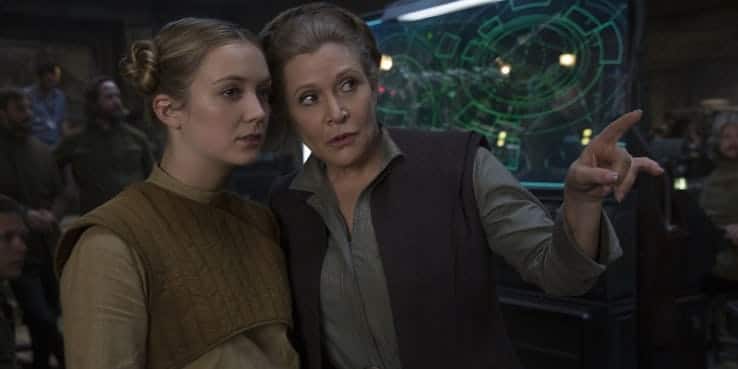 Abrams needed Leia to appear in The Rise of Skywalker, meaning her presence in the movie is pretty much entirely compiled from archival material. She’s set to have scenes with Daisy Ridley and her daughter, Billie Lourd. Although some might consider it disrespectful, it seems likely she’ll die in the film, especially since the two sequel films so far have each seen one of the series’ main three heroes die.

Han and Luke’s death might give some indication of how Leia will die. They sacrificed themselves to protect what they loved. Han died trying to save his son, and Luke died to save the Resistance and his sister, Leia. It seems likely Leia’s ending will be suitably heroic, likely towards the movie’s end at the ruins of the Death Star II. As Abrams didn’t have a lot of footage to work with, a lot of what Leia does might have to be off-screen. It also seems likely there will be some tribute to the the character and/or the actor in the film. 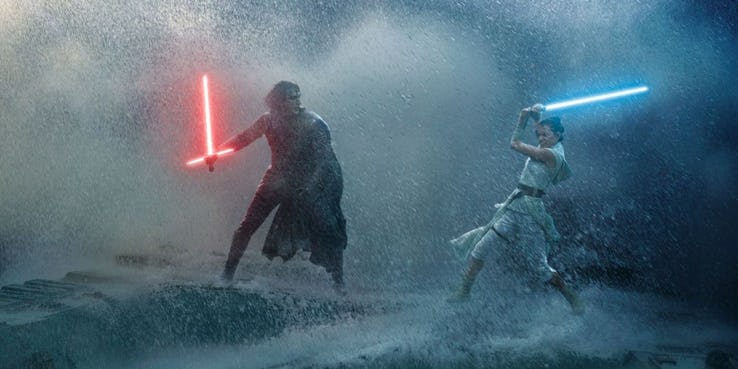 The Last Jedi makes clear the destiny of Kylo Ren and Rey are tied together. As Snoke eloquently put it, Rey’s Light raised to meet Kylo Ren’s Dark, almost like one couldn’t exist without the other. As they’re the only living embodiments of the Dark Side and Light Side of the Force, they’re definitely going to face off in The Rise of Skywalker,

and its status as the last movie in the trilogy means both could theoretically die.

Any potential death, and maybe rebirth, scenes will probably take place in the ruins of Death Star II. The setting fits both Kylo Ren and Rey, because it brings together the two symbols that power and consume them: Water for Rey and Relics for Kylo. The location is also the perfect representation of the destruction and pain that the constant fight of the Jedi and the Sith brings to the galaxy. If one of the two does die, Kylo seems the more likely candidate, as Abrams has shown his love of symmetry with the original trilogy and the First Order leader does have a lot of parallels with both Darth Vader and Emperor Palpatine.

These Characters are Pretty Unlikely to Die 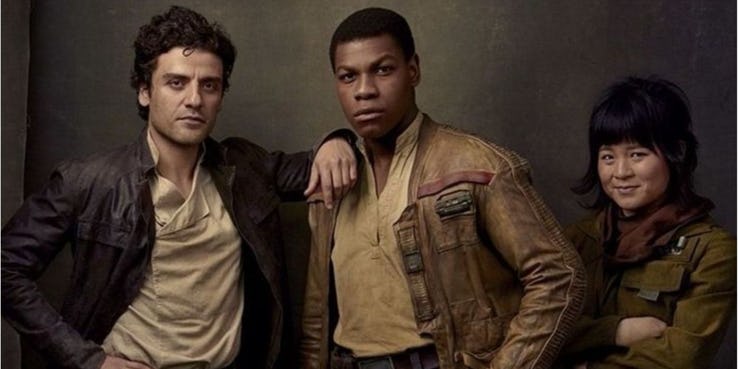 Poe, Finn and Rose could definitely die, but there are a lot of reasons they might actually survive. Their story arcs can’t be as clearly resolved in The Rise of Skywalker, making them the perfect candidates to appear in future Disney Star Wars movies. President of Lucasfilm Kathleen Kennedy said, after all, the franchise might revisit some of the sequel trilogy characters in the future, indicating at least one of the movie’s heroes does survive.

Their arcs might rely on what happens after the events of The Rise of Skywalker. Poe needs to become a trustworthy leader, stepping into Leia’s role; Finn by integrating into civilian life, leaving behind the arms he hates so much; and Rose by rebuilding whatever is left through her amazing technical skills.

Lando, Chewie And The Droids 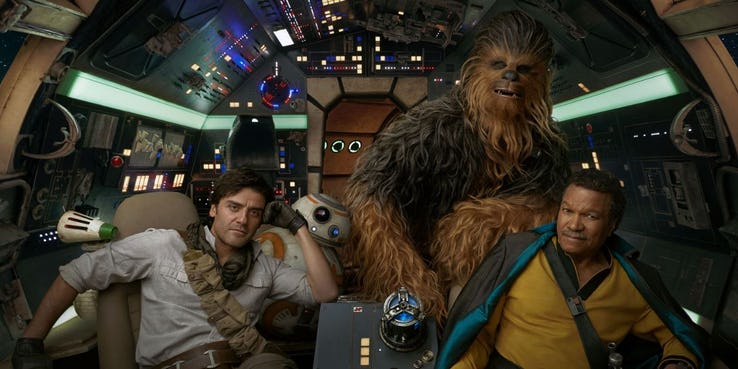 Lando and Chewie probably won’t die. Lando’s basic wish has been clear in every movie: Get the Millenium Falcon back. Chewie needs a co-pilot badly, so there’s definitely a way to satisfy that wish. Besides, Chewbacca has survived eight movies, and he is the living memory of the galaxy, much like R2-D2 and C-3P0 are the Galaxy’s technological memory. BB-8 is also definitely safe, as he’s too cute. Disney won’t go there.

Starcast: Starwars: The rise of Skywalker