“Crisis on Infinite Earths,” the upcoming Arrowverse crossover event, promises to be the biggest, most Earth-shattering yet. With confirmed guest stars and surprise characters including the likes of Tom Welling and Erica Durance (Smallville‘s Clark Kent and Lois Lane), Brandon Routh (as Kingdom Come Superman, not as the Atom) and even Burt Ward (in a currently unknown role), the hype is building fast. And at least one casualty has officially been confirmed.

Much to the shock of fans, Barry Allen — the CW’s own Scarlet Speedster — will expire at some point during the epic crossover. But it’s not the first time this has happened. CW’s “Crisis on Infinite Earths” takes its name and inspiration from Marv Wolfman, George Perez and Jerry Ordway’s 1980’s comic book event Crisis on Infinite Earths, which changed the DC Universe forever. Barry Allen was a casualty of that series too, so this is something that fans of the source material may have seen coming.

Crisis on Infinite Earths was as dramatic and ambitious as comics can be. The 12-part series shook up DC Comics continuity, which is exactly what it was designed to do. By 1985, the DCU’s multiple earths and its continuity as a whole were becoming quite convoluted, making it harder for new fans to come on board and understand what was going on.

So, wanting to simplify the DCU and attract new fans at the same time, Marv Wolfman, who had written such successful titles as New Teen Titans and The Amazing Spider-Man, pitched the Crisis on Infinite Earths concept (originally called The History of the DC Universe). After four years of development, many meetings and research that included a hired hand reading every single comic in DC’s history up until that point, Crisis on Infinite Earths #1 hit the shelves in April 1985, coinciding with DC’s 50th Anniversary and with a glorious double-sided cover by George Perez. 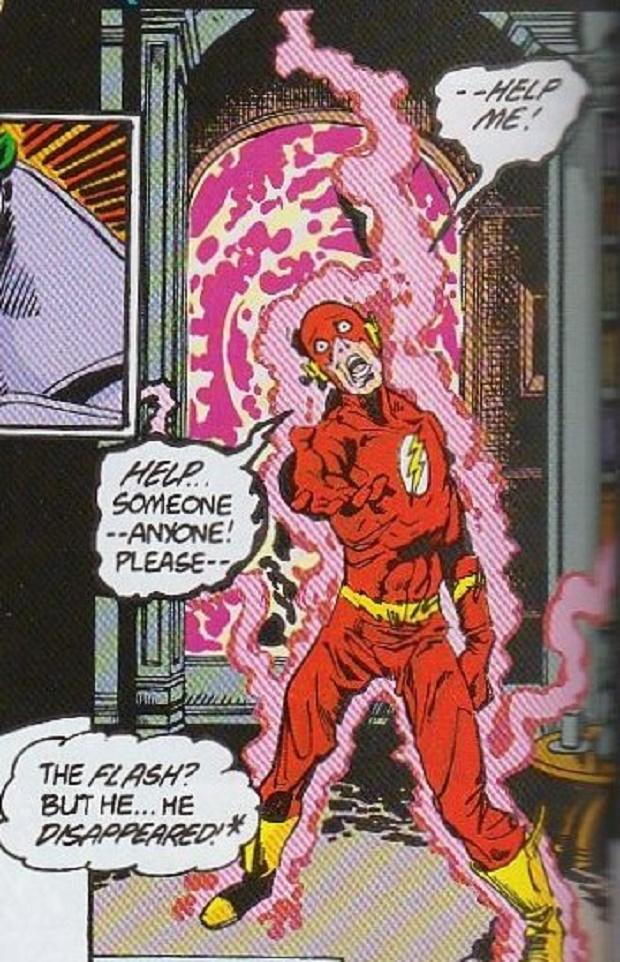 Due to a cosmic accident when the Big Bang occurred, not just one universe but many were formed, each with its own history and timeline, separated only by a fragile vibrational thread. This made the multiple universes weaker and more vulnerable than a single consolidated universe would be. The Monitor and his sidekick, Harbinger, go on a recruitment drive through time and space, enlisting the help of heroes to help merge the remaining five universes in the multiverse into one single reality that’s strong enough to withstand the Anti-Monitor’s attack. And that is the basic premise for Crisis on Infinite Earths.

Interdimensional travel is an integral part of the Flash mythos

The first real instance of the Multiverse in DC continuity occurred in the Silver Age tale The Flash of Two Worlds (The Flash #123, 1961), when Earth-1’s Barry Allen inadvertently vibrates onto the Earth-2, home of Golden Age Flash Jay Garrick. This led to more multiversal crossovers in the future, with the Justice League and the Golden Age Justice Society getting together regularly and the Flash habitually popping from universe to universe and through time with the help of his Cosmic Treadmill.

Barry appears to Batman twice , disappeared after the events of “The Trial of the Flash.”

During Crisis, Batman is fighting the Joker when an emaciated Flash appears to him and disintegrates before his eyes after giving an ominous warning, which surprises the Caped Crusader, as Barry disappeared after the events of “The Trial of the Flash.” Later in the crossover, Flash is shown in Earth-1’s 30th century, where he and Iris have been living peacefully for an all too brief time. Natural disasters are occurring and Flash is struggling to keep up. but when he sees the anti-matter wave approaching, he vibrates his molecules just in time to shift dimensions, narrowly escaping the void.

When next we see Barry, he appears to Batman again, warning him once more of something that’s terribly wrong. Time is all muddled up at this point because this is not the emaciated Flash that appeared to Batman earlier; this version has just arrived from the 30th century and still seems pretty much himself. The Flash’s appearance soon changes, as he’s suddenly pulled away, begging the other heroes to help him before he dissolves into another dimension, leaving everyone at a loss as to what could be going on.

Ultimately, Barry is transported to a shadowy place by an equally shadowy figure, where mind manipulator Psycho-Pirate is also being held captive. Pirate soon subdues Flash with his powers. However, Flash overcomes Pirate’s mind control through sheer willpower and confronts the shadowy figure who brought him to this dark place. The figure reveals himself as “The Monitor.” But this is not the Monitor from earlier on in the story. This is the Anti-Monitor.

Later, following a battle which results in Supergirl’s death, the Anti-Monitor returns to the planet Qward, where Psycho-Pirate is having deep regrets about serving him. Barry is imprisoned by Qwardian constrainer gel, but he’s been slowly increasing his vibrations, allowing him to spin out of his shackles and escape. Psycho-Pirate leads Barry to the Anti-Monitor’s Anti-Matter cannon, where he makes a horrifying discovery. The weapon that the Anti-Monitor is aiming at the remaining realities is powered by pure concentrated anti-matter, and it could destroy everything. This is where it’s revealed exactly how important the Flash is to the universe. There’s only one thing standing between the Anti-Monitor and complete destruction: Barry Allen.

Barry’s only option is to run against the flow of the Anti-Matter engine that powers the cannon so that he can create a vortex powerful enough to destroy it. And even though it’s complete agony, Barry doesn’t stop running. Soon, it’s revealed what Flash’s ghostly appearances meant earlier on, as in destroying the weapon he’s also flashing back through time. 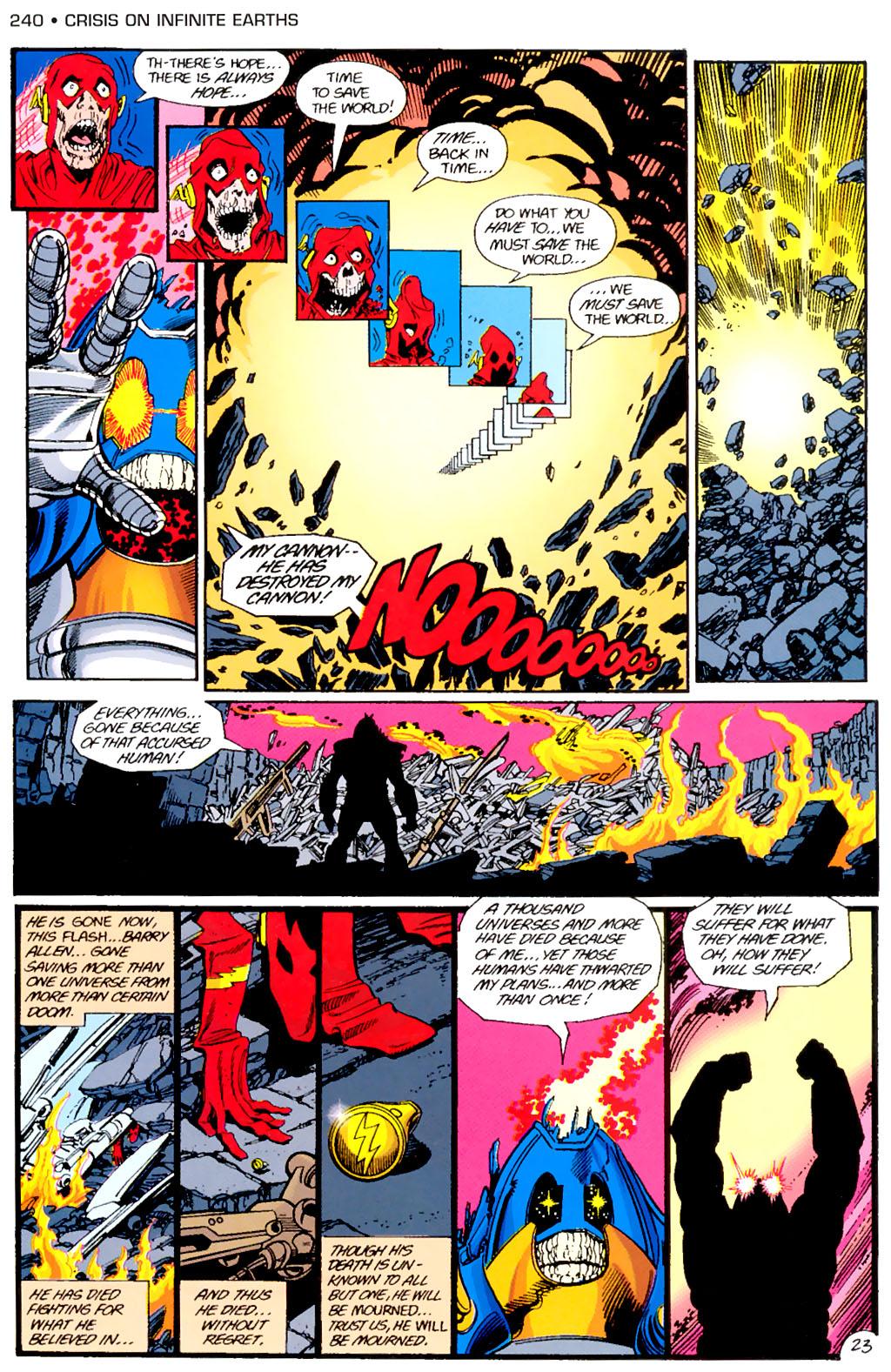 And in doing so, he destroys the Anti-Monitor’s cannon, saving the entire DCU from complete obliteration. Barry’s sacrifice is not the end of the crisis, but it’s the beginning in a series of victories that signal the Anti-Monitor’s demise. Barry was also the catalyst for the ultimate interdimensional victory, which saw all the parallel universes blend into one, making them more stable and powerful while also freeing them from the grip of the Anti-Monitor and his minions. Just as Barry introduced interdimensional travel to the DCU, so was he — quite fittingly — the one to take it away.

The Arrowverse seems set to take a cue from the original Crisis on Infinite Earths when it comes to the Flash’s death, though if it happens in exactly the same way is unknown at this time. If faced with a similar choice, there can only be one outcome for the heroic Barry Allen. Although he was absent for quite awhile, Barry did eventually return in the comics. The show might just be looking to expedite the process if it wants The Flash to keep focusing on Barry Allen.