With Tim Burton’s Batman in 1989, the superhero genre made a big leap forward. Michael Keaton’s portrayal of the suave, yet haunted Bruce Wayne in one of the first truly memorable comic book adaptations to the big screen was the moviegoing audience’s first real taste of the hero after the release of some of the protagonist’s more gritty comics like The Dark Knight Returns and Batman: The Killing Joke. Nonetheless, his remarkable portrayal fell short of Jack Nicholson’s crazy escapades as the Joker. Making significant alterations to the Batman mythos, Nicholson’s gangster-turned-lunatic has survived, due in large part to the actor’s predilection for portraying insane characters in the cinema. Nicholson became the perfect on-screen image of the role, happily murdering his victim with a lethal joke and a smart one-liner, with his devilish smile and frightening look. But, despite his warped ecstasy, Nicholson’s portrayal is still overshadowed by Heath Ledger, the late actor who became so absorbed with the part that he became a recluse in order to replicate every repulsive mannerism of the character. Despite the fact that both sides capture distinct aspects of Batman’s ultimate adversary, only one can be proclaimed the real Crown Prince of Crime. While Nicholson’s Joker isn’t the most popular option, he prepared the way for Ledger’s portrayal, leaving a lasting impact on the character. So, with respect to both performances, here are our 8 Reasons Why Jack Nicholson Was A Better Joker Than Heath Ledger.

There’s a moment early in Tim Burton’s film where Jack Napier (the criminal who would soon become the Joker) gets labelled as vain after looking in the mirror. Vicki Vale later cracks a similar joke about a huge mirror inside Bruce Wayne’s house. In contrast to the self-absorbed Napier, Wayne’s mirror is eventually shown to be nothing more than an entryway designed to conceal one of Batman’s many hidden rooms within the structure. Napier is shown from the beginning of the film as a pompous narcissist with a penchant for the best things in life. He keeps his elegant ways after becoming the Joker, preferring to spread his colorful personality to everything he touches. When he uses sulfuric acid to disfigure his mistress, Alicia Hunt, he refers to her as a piece of art. Similarly, he spreads his influence by re-painting works at a local art museum using green and orange colors. As a madman, Nicholson’s Joker remains a sophisticated adversary, brightening up the city with his evil touch. 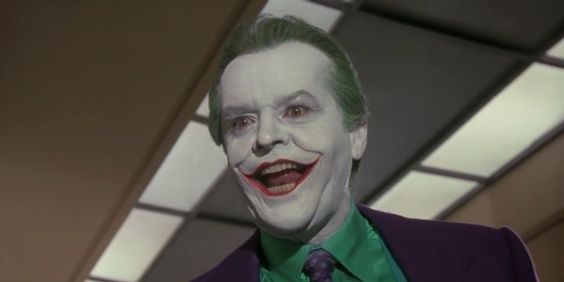 The Joker’s focused smile was replaced with scars on either side of his face as part of The Dark Knight’s realistic, gritty aesthetic, giving Heath Ledger his iconic grin. The actor didn’t have to do much to make spectators cringe at his horrifying appearance after changing his terrible tale about how he got his scars. However, Jack Nicholson’s iconic smile, replete with high-raised brows, not only added to the character’s air, but also provided inspiration for makeup artist Nick Dudman. Before filming on Batman began, Dudman travelled to Burbank to obtain a life-cast of Nicholson’s wicked smile. Dudman created five variations of the Joker’s trademark appearance using extra pictures of the actor’s smile. Finally, Nicholson had the ultimate say. The deep depressions in his face gave the Joker a look of great menace, which was only exacerbated when Nicholson added his own touches to the role, making his smile one that remains distinctive to his personality.

6. He’s The Only Villain Of His Movie: 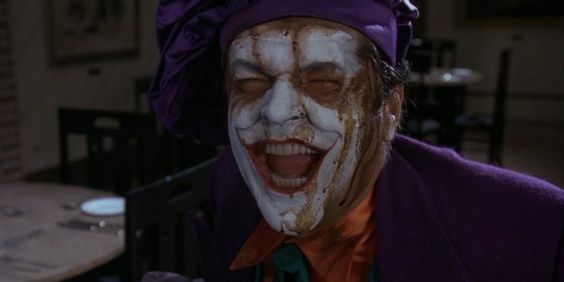 As the stakes of superhero films rise, studios continue to place a focus on cramming the screen with an excessive number of villains. Finding problems in Christopher Nolan’s The Dark Knight may seem like nitpicking considering the film’s incredible critical praise, but if we had to select one thing we could alter, it would be the lack of justice delivered to Harvey Dent. Dent, the White Knight to Bruce Wayne’s Batman, was enticed into a life of crime by the Joker following the murder of his fiancée, Rachel Dawes, transforming the hideously scarred district attorney into the ferocious Two-Face. The timing of his development is well-managed, but his tale regrettably takes a back seat to the Joker, which is exacerbated when the character is murdered off far too soon. While it isn’t entirely Ledger’s fault, the character steals the attention from Two-Face, demonstrating that the Joker is a monster who must stand alone when facing Gotham’s Bat.

5. He Has Better Henchmen: 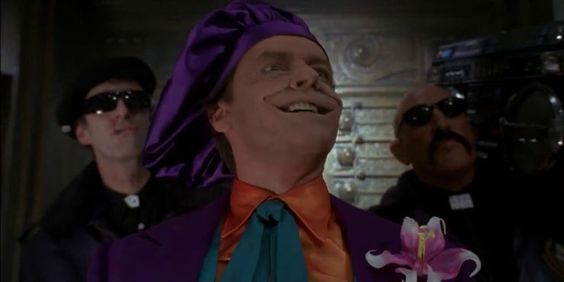 When you’re a maniac with a propensity for frightening city streets, it might be difficult to get reliable assistance. In the movies, the Joker’s goons have done little more than serve as targets for Batman. Still, if you’re going to have followers, you should provide the groundwork so that your minions are obedient. The henchmen from The Dark Knight are instantly shown as wildly unpredictable, systematically killing each other at the command of the Joker, donning clown masks in the opening bank heist. They appear to continue following him out of fear, although they are rarely observed conversing with the villain. The link is considerably apparent in Batman. After shooting Carl Grissom in his office, Jack Napier takes over Carl Grissom’s mafia business. Napier, Grissom’s second in command, already had a good relationship with his thugs. Although they are barely passable, they appear to be having fun with him during his attack on the art museum, making his gang superior to the random assortment of criminals portrayed in The Dark Knight. 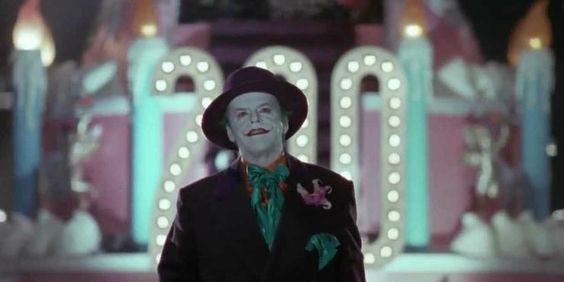 Rarely is a villain so charming that he worries about his public image, but Tim Burton’s Joker was unlike any other. When he instilled terror in the citizens of Gotham, he did so with devotion to his art. Not only did his techniques assist him achieve his aim of drawing Batman out of hiding, but they also made Gotham aware that no hero could clean the streets of Gotham alone. Taking aim at the city’s anxiety, the Joker takes over the airwaves of Gotham’s news station and broadcasts his own advertisement for Smilex. He informs the world about his scheme, complete with smiling, red-lipped models praising Joker’s every word. He informs the public about his plan to contaminate the town with unidentified cosmetic goods. Keeping with his cheerful demeanour, he subsequently arranges a parade for the very people he poisoned, showering them with money as he drives past, demonstrating that even the most heinous criminals can have a good time when given a chance in the limelight. 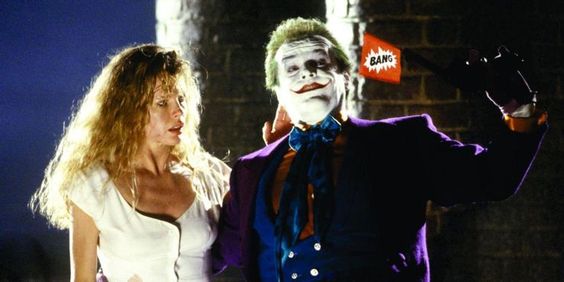 Beyond the gloomy depravity of the streets, it might be difficult to find much to be thrilled about in Tim Burton’s filthy dystopia of Gotham. Before he became the Joker, Jack Napier was unconcerned with the frequently observed Batman. Instead, the gangster’s interests were in acquiring Carl Grissom’s criminal enterprise and sleeping with his mistress, Alicia Hunt, behind her mistress’s back. As it turned out, Napier’s romance led to Grissom betraying his second in command, converting Jack into the Joker. Of course, even in his insanity, Napier retains an interest in unattainable women. After expressing appreciation for her work as a photographer, the clownish criminal dines with Batman’s love interest, Vicki Vale, during an intimate moment at an art gallery, and subsequently shows regret for the loss of Alicia after she leaps out of a window to escape him. Before Harley Quinn existed, we got a glimpse of the Joker’s more amorous side, which is missing from Christopher Nolan’s version.

2. He Has A Long-Standing History With Bruce Wayne: 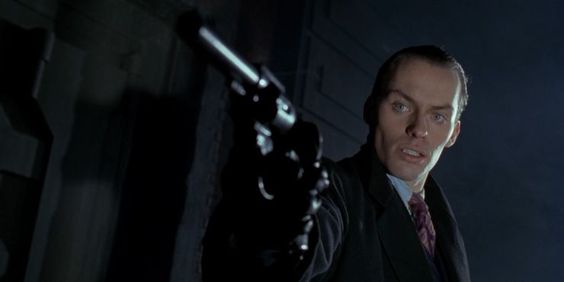 Following the success of Pee-Big Wee’s Adventure in 1985, Warner Bros. requested Tim Burton’s assistance in bringing Batman to the big screen. Despite admitting that he is not a big comic book enthusiast, Burton asked Sam Hamm to write the script. To deviate from the traditional origin narrative of Bruce Wayne, Hamm opted to convey the hero’s past through flashbacks, resulting in a stunning surprise in the film’s second half. After nearly murdering a helpless Bruce Wayne in cold blood, the Joker is portrayed as a young man on the night of his parents’ deaths in one of Bruce’s flashbacks. One of the Joker’s sayings is, “Have you ever danced with the devil in the pale moonlight?” a question Wayne recalls Napier asking his parents just before shooting them. The incident would become a watershed event in Wayne’s life, propelling him to become Gotham’s Dark Knight and solidifying his vengeance against the Joker, which began when he was a boy.

1. He Has A Better Origin And Motive: 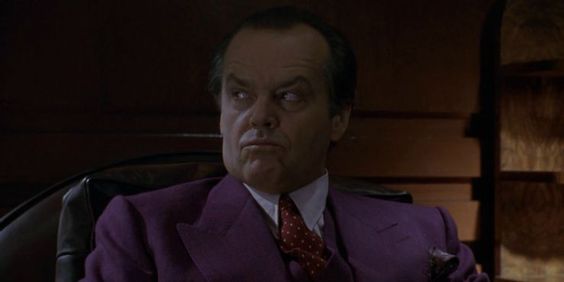 The Joker’s alter persona, Jack Napier, was created especially for the film and was a hood who resorted to a life of crime after arriving in Gotham at a young age. He rose through the ranks of Carl Grissom’s mafia to become the mob leader’s right-hand man before being set up by his boss. entrusted with recovering some secret papers from an Axis Chemicals factory, a suspicious Napier approached the hazardous facility with his thugs shortly before Grissom phoned the cops to capture and imprison Napier indefinitely. A shootout followed, and Batman eventually intervened. When attempting to assassinate the masked vigilante, Napier was wounded by a ricochet gunshot, leaving his face disfigured. He lost his balance on a catwalk hung over a vat of chemicals in the process. When Batman attempted to assist Napier in getting back up, he lost his grip, leading Napier to tumble into the vat below. Returning as the Joker, he vowed vengeance on the man who had rendered him psychologically insane. What about Heath Ledger’s interpretation of the Clown Prince of Crime? We have no notion where he originated from because of his untrustworthy retellings of his beginnings.

So, as you can see, these are the 8 reasons why Jack Nicholson was a better Joker than Heath Ledger. What do you guys have to say about that? In my humble opinion, a few of these points prove that Jack Nicholson was a better Joker than Heath Ledger. Despite that fact, I think that Heath Ledger was and will forever be our all-time favorite Joker. What does the audience want to say? Please let us know in the comment section below. Until then, keep on reading Animated Times, the perfect place to get a closer look at the entertainment industry, upcoming movies, TV series, celebrity gossip, and much more. We’ll have you covered, and follow us on Instagram and Facebook for more.