Marvel’s Agents of SHIELD is ending after season 7, but why have ABC pulled the plug? Marvel Television had originally assumed that Agents of SHIELD season 5 would be the end of the road. That’s why the season finale was called “The End,” with the SHIELD team overcoming their greatest threats and saving the entire planet from Hydra, an alien Confederacy, and the insanely powerful Graviton. To Marvel’s surprise, though, ABC offered them two more seasons, albeit with reduced episode counts.

They used the SDCC 2019 panel as a celebration of everything they’ve achieved over the years. Adding to the sense of emotion, this year’s San Diego Comic-Con actually took place while the Agents of SHIELD team were in the middle of filming the very last episode. All the main cast were in attendance, and several of them needed tissues.

No doubt there’ll be intense speculation that Agents of SHIELD‘s cancellation is due to ratings, but that’s almost certainly not the case. Although the Marvel series doesn’t perform terribly well in terms of live audiences, it’s well known for being a big hit DVR; if this were just a matter of live ratings, then ABC would never have ordered season 7. Reinforcing this point, last November third party analytics firm Parrot Analytics suggested that Agents of SHIELD is the most in-demand Marvel Television show in the United States. It’s consistently ranked in the top 0.03 percent of TV shows. To give a sense of Agents of S.H.I.E.L.D.‘s popularity, in the US shows with similar demand include Better Call Saul, Criminal Minds, and Vikings.

The cancellation was Marvel’s choice 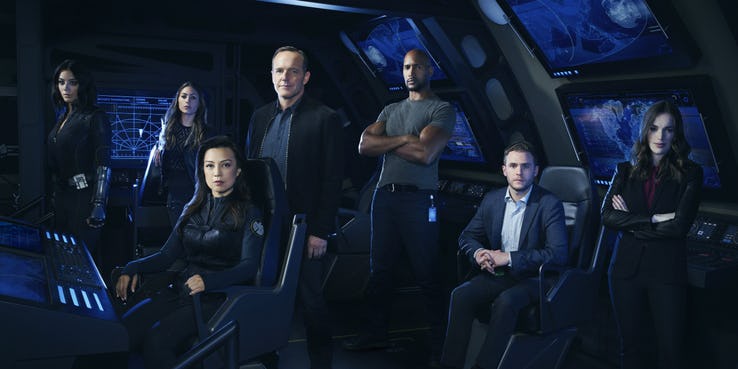 Speaking to Deadline, Marvel Television chief Jeph Loeb insisted the cancellation was actually Marvel’s choice. When ABC president Channing Dungey contacted Marvel with the offer of Agents of SHIELD season 7, the creative team sat down to decide the show’s future. “We all came to the conclusion that getting another season is so flattering, so lovely, so amazing,” Loeb observed, “but how about if we go back and say, yes, but this is it.” The decision allowed Marvel to end Agents of SHIELD on their own terms, rather than be at the mercy of the network. It’s possible they didn’t want Agents of SHIELD to suffer the same fate as the various Marvel Netflix shows, which were cancelled by Netflix with a lot of loose ends left unresolved.

Agents of SHIELD has had a good run. Precious few shows get seven seasons, and that’s a particularly impressive feat for one that’s had to keep redefining itself. SHIELD started out as the MCU’s official tie-in TV series, but in 2015 a corporate restructure led to Marvel Studios and Marvel Television parting ways. Since then, Agents of SHIELD has essentially blazed its own trail, building its own mythology and becoming something quite distinct from the movies. The series has outgrown anything Marvel could reasonably have expected, and they seem justifiably proud of it. That’s why they want to ensure Agents of SHIELD doesn’t outstay its welcome; they want to end on a high note.