Michael Waldron, Head Writer of Marvel and Disney plus series Loki, reveals why other Loki variants are more successful than the central variant played by Tom Hiddleston. 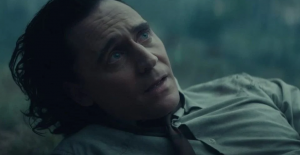 Marvel and Disney plus series – Loki’s head writer explained why other Loki variants that appeared in episode 5 are more successful than God of Mischief. In the series, Hiddleston plays the 2012 version of Loki, who escapes during Avengers: Endgame and gets arrested by the Time Variance Authority.

In the last episode, Loki gets pruned by the TVA. He ends up landing the void where all pruned variants are usually dumped. There, God of Mischief discovered three more variants: Kid Loki, Alligator Loki, and Classic Loki. Other variants also show up in the middle of the episode where Boastful and President Loki get introduced in a scene. When all these variants end up being present under a common roof, they hilariously start betraying each other. Even though the sacred variant of Loki is more reasonable, God of Mischief was not as successful as other variants in the room.

During an interview with Michael Waldron, he mentions the prime idea and role of Loki in the Sacred Timeline. In the pilot episode, Mobius says, “It is your job to lose so others can become the best versions of themselves.” Linking to this phrase, Waldron echoed how important it is for Loki to lose so that others could win, for instance, the Avengers.

In the middle of Loki’s 5th episode, Classic Loki says, “We lie, and we cheat, we cut the throat of every person who trusts us, and for what? Power. Glorious power. Glorious purpose!” To answer this question, Kid Loki replies, “we’re broken, every version of us. Forever. And whenever one of us dares try to fix themselves, they’re sent here to die”. While the reason behind Classic Loki’s success is an unaffected timeline, it remains unclear why variants like President Loki and Boastful Loki are successful.

The anti-hero version of Loki was not supposed to die at the hands of Thanos in Infinity War. However, he managed to survive and escape with the Tesseract Circa in 2012. In episode 5 of Marvel and Disney plus series Loki, Loki echoes that “nothing can change until the TVA is stopped” as he realizes that the organization is determinism-driven.

While dealing with the Meta, the God of Mischief’s character symbolized greed, cowardice, and envy. He stopped being a coward and greedy episodes ago when he met Sylvie. As Classic Loki sacrifices his life for the “Glorious Purpose” in episode 5, he proves that the variants are more powerful than they could realize. It is assumed that together, God of Mischief and Sylvie will become the best version of themselves and will prominently hunt down the creator of TVA in the next episode.