Ryan Reynolds is the uncrowned king of wits in Hollywood and that is a fact. And it is no secret that the Free Guy star’s jokes are not for the fainthearted as he often takes them too far. He and his wife, Blake Lively are always involved in a savage back-and-forth, and they don’t let a single chance to roast each other slide. Even each other’s deaths are not an off-the-table subject for their jibes. Recently, the 46-year-old made yet another joke suggesting he might leave his entire family behind to buy an NFL team.

Ryan Reynolds, father of the year?

Ryan Reynolds was recently a guest on The Tonight Show Starring Jimmy Fallon to talk about his upcoming project Spirited. However, the topic of conversation began with Reynolds’ upcoming baby, who will be the couple’s 4th child, which Reynolds called “a lot”. The Deadpool star discussed how his daughters have proven more hazardous to him than doing literal stunts for films,

“We have three beautiful girls right now and fourth one on the way. It’s really making me rethink stunts. You know, I’ve been doing action movies for 25 years. I’ve broken 12 bones. I just had a 7th surgery. And you know, kids, though, they beat you up… Oftentimes, like, it’s not an alarm clock that wakes me up. It’s like a knee to the jugular… I’m rethinking doing stunts now because I’m starting to realize, like, I want to be able to still kind of be active with my kids and stuff.”

Describing the manner that he plays with his daughters, Reynolds said,

That is quite a ride that the 6 Underground star’s kids are on.

Next on the shopping list: a Canadian Hockey team

Further in the interview, Fallon went on to ask about Reynolds being the owner of a professional soccer team, called Wrexham AFC. The two further talked about The Proposal star looking to buy an NHL professional hockey team next. Being a Canadian, hockey was an inherent part of Reynolds’ childhood, therefore investing in that sport would be something really close to his heart. The team that he has his mind set on is called The Ottawa Senators. However, he doesn’t have enough money to buy the team, as it is “very expensive” and that is the reason why The Adam Project actor is in need of “a sugar mommy or a sugar daddy.”

Reynolds then went on to explain how buying the hockey team would be an issue for his family life, as “Wrexham has consumed half of my life. And then, the other half might be consumed by something like this. I figure the kids, my kids, they’ve got it now. They can do it on their own from this point forward.”

Fallon carried on the quip, alluding to Reynolds’ joke about throwing his kids in the air, “Now you’re throwing them up and not catching them.” To this, Reynolds replied, “Yeah, it’s just a dad-sized hole in the wall. I’m gone.”

Can’t say how normal wives would have reacted to that joke but Blake Lively must be slapping her knee. Although who knows, this might have been a point of contention between the spouses. It was all over the news that he bought Wrexham AFC without consulting the Gossip Girls alum, and that led to some altercations. However, whatever the problems may be, fans would hope that the two can brave through them as they are currently one of the most popular celebrity couples in Hollywood. 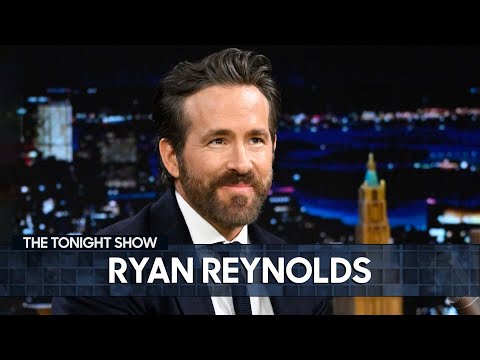