Jean Grey or the Phoenix has always been among the most well-developed characters of the Marvel Cinematic Universe’s (MCU) ‘X-Men‘ franchise. Jean Grey appears as a secretive mutant with a cheerful persona. She possesses a dark side bubbling just beneath the surface. Fans have been in awe of the ancient Phoenix Force that represents the forces of destruction and creation. In the X-Men series, the phoenix Force binds with Jean Grey. As a result, her ugly side is forced out, giving birth to the Dark Phoenix. Here are ten Dark Phoenix Fan Art pictures that represent turning points in her story. The sheer beauty with undertones of danger speaks volumes regarding the enormity of the character in the MCU.

Birth of the Phoenix: Dark Phoenix Fan Art by Arkuni 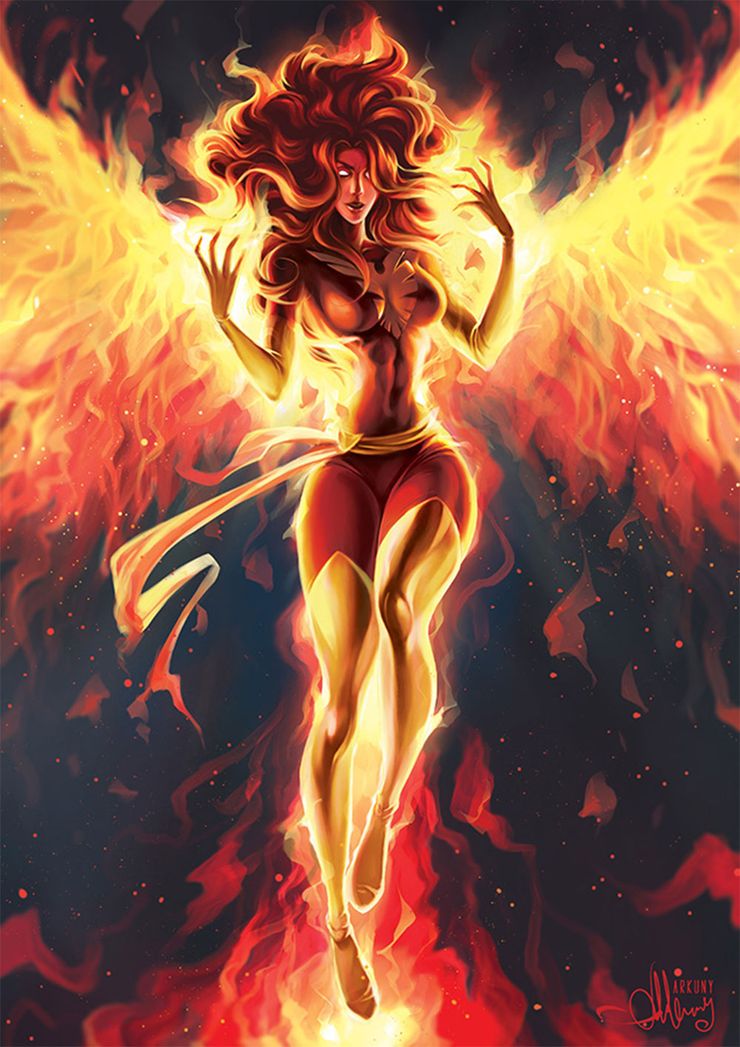 This piece envisions the transition of the quiet, secretive Jean Grey into the Phoenix. The color scheme complements Jean’s lust for power at that moment. The poise and the background symbolize the birth of chaos from tranquility. 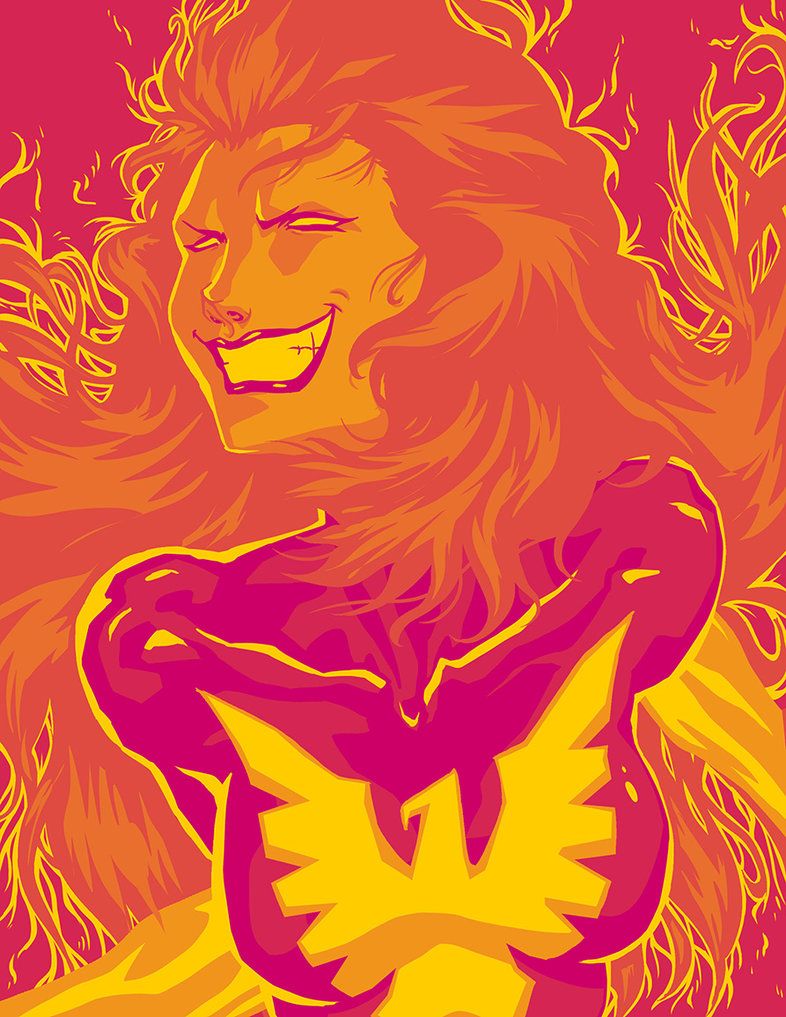 The art piece resembles comic art from the early 90s. Past comic artists generally depicted the villain’s transition from a simple miscreant to a super-powerful entity as such. The odd color combination of red, metallic gold, and hot pink pumps up the sass. 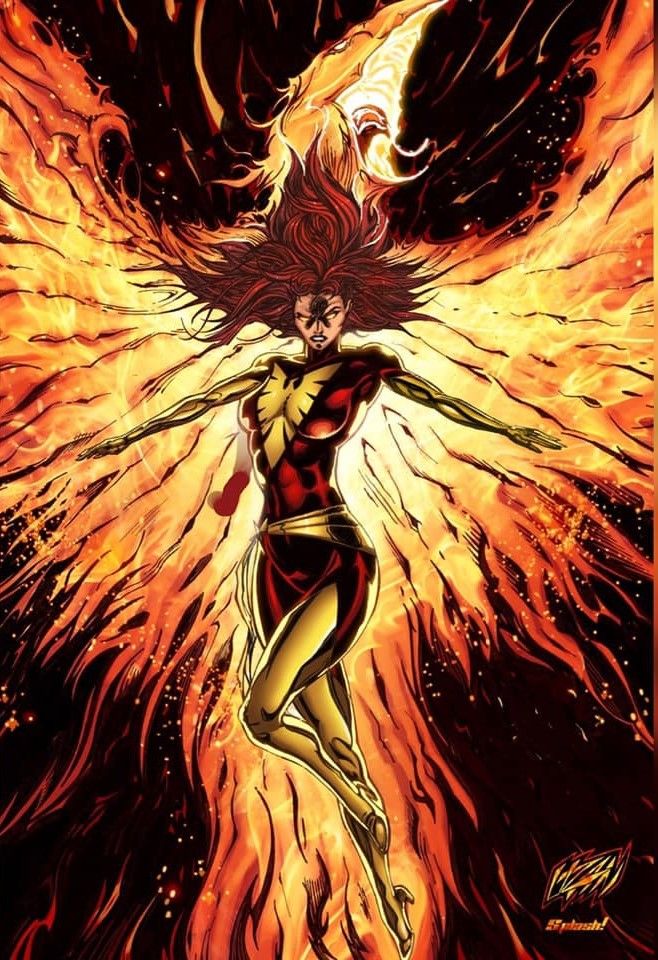 The piece is a unique sketch with contrasting yet balanced colors. It is an authentic Dark Phoenix fan art piece, depicting the breath-taking beauty and the character’s destructive potential. 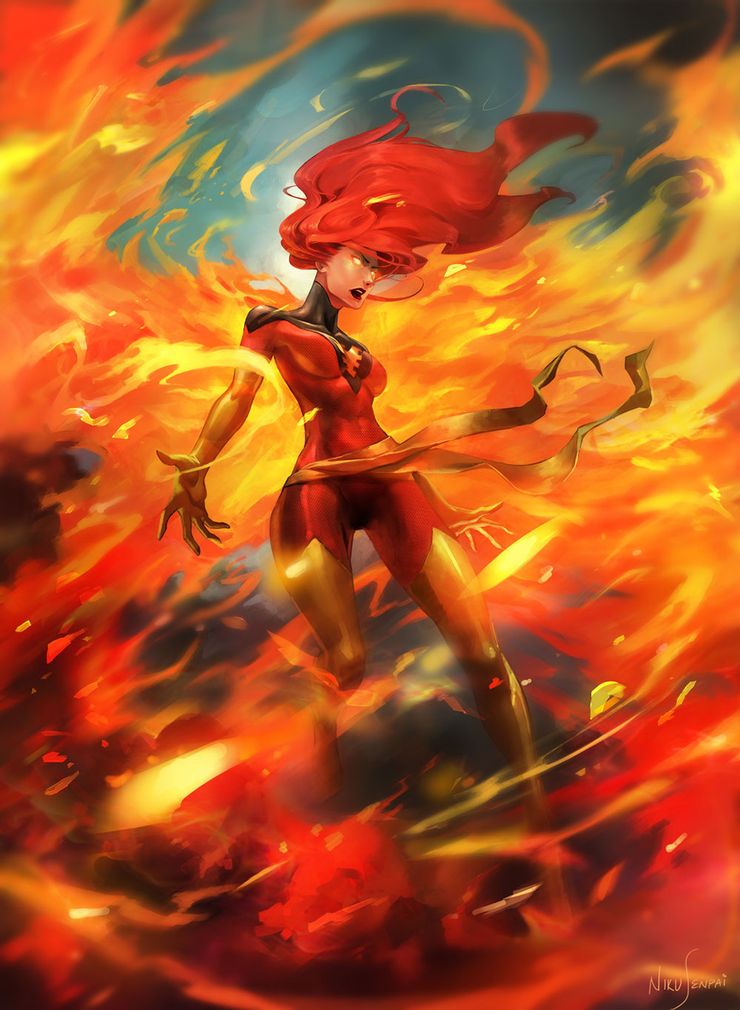 The artist has captured the Phoenix’s rage taking over her sensibility. She is on the brink of falling prey to her dark side or causing mass destruction. The colors birth an inferno about to blaze. 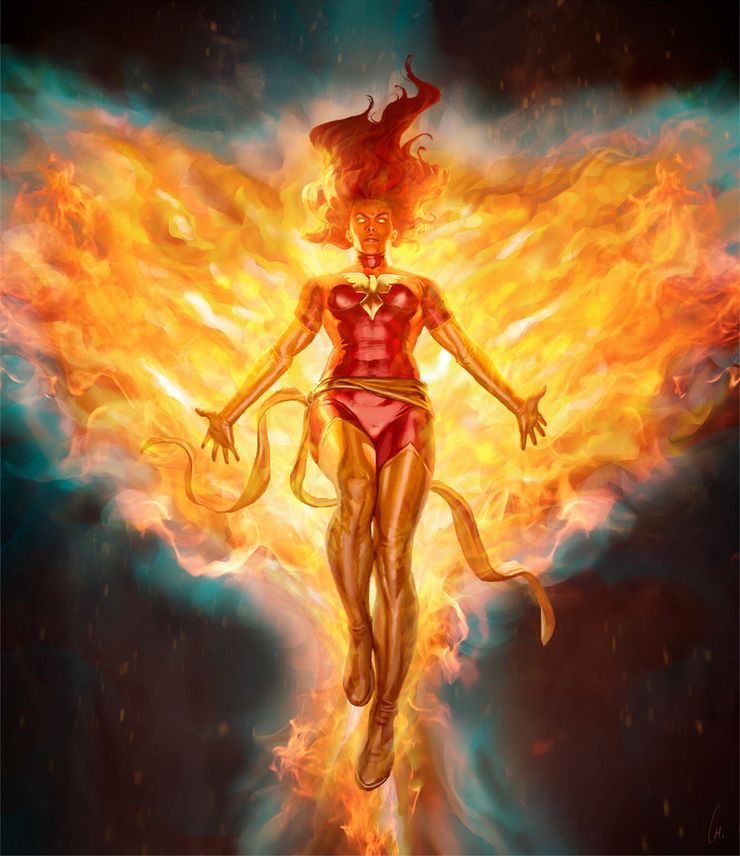 Jean has succumbed to the crevices of her darker side. In complete possession of her abilities, the Dark Phoenix displays a calm, ruthless face of imminent destruction. The haunting beauty calls out to her unconquerable nature. 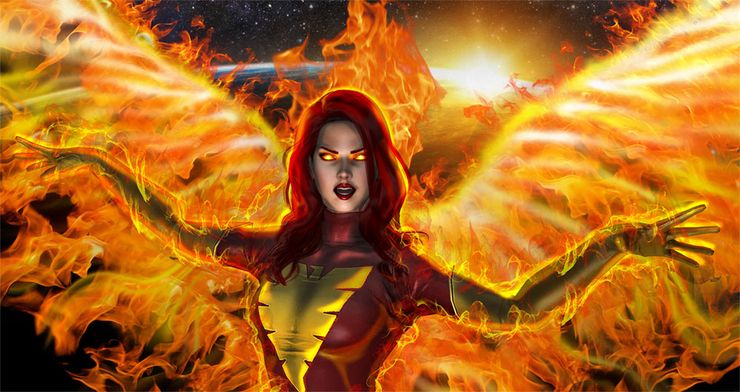 The Phoenix appears to be in complete control of her power. Her calm face and stoic demeanor seem even scarier than her raging form. The background is an unguarded Earth. As a result, it becomes the absolute equivalent of a cat watching a mouse before the kill. 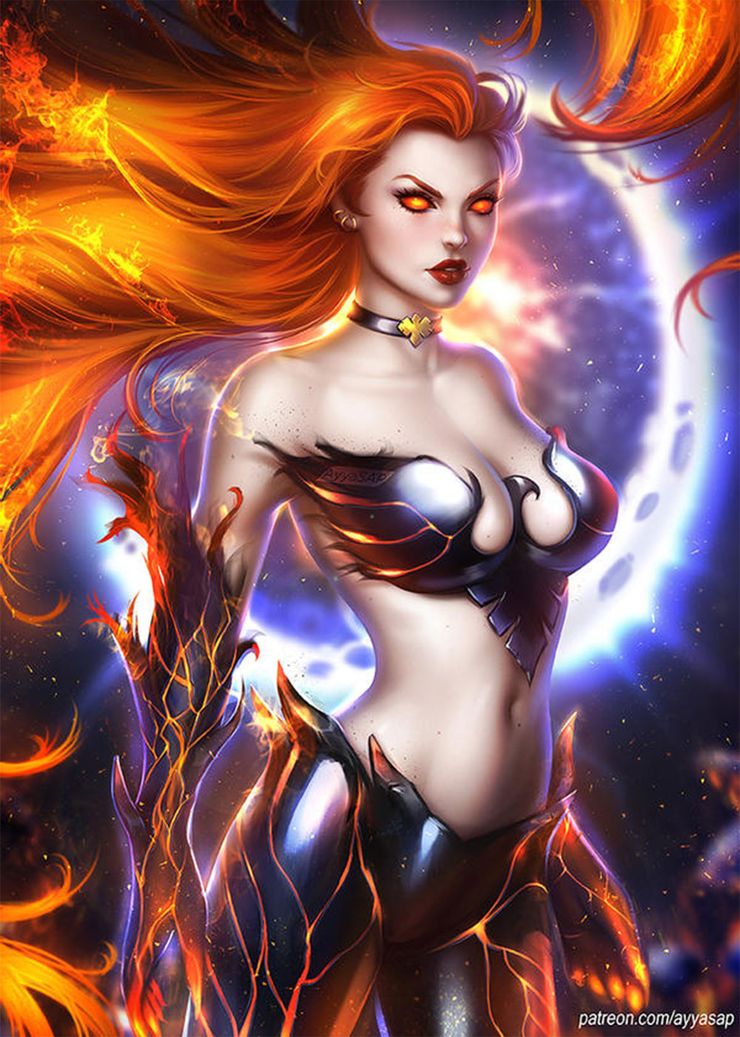 The artist toys with the delicate feminity and the massive destructive potential possessed by the Phoenix. In this Dark Phoenix fan art piece, Jean appears in obsidian armor with inset flames. The sketch is both frightening and attractive. 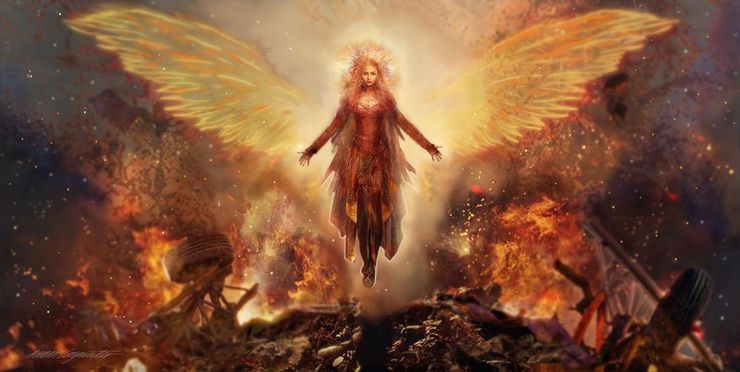 MCU’s 2019 release ‘Dark Phoenix’ serves as inspiration for this art piece. The Phoenix appears as an angel with an energy halo. She rises above chaos and destruction in the background. The viewers may debate whether the Phoenix is an angel or a reformed devil who found redemption.

The Phoenix in Unbridled Rage: Depiction of True Anger by Raymund Lee 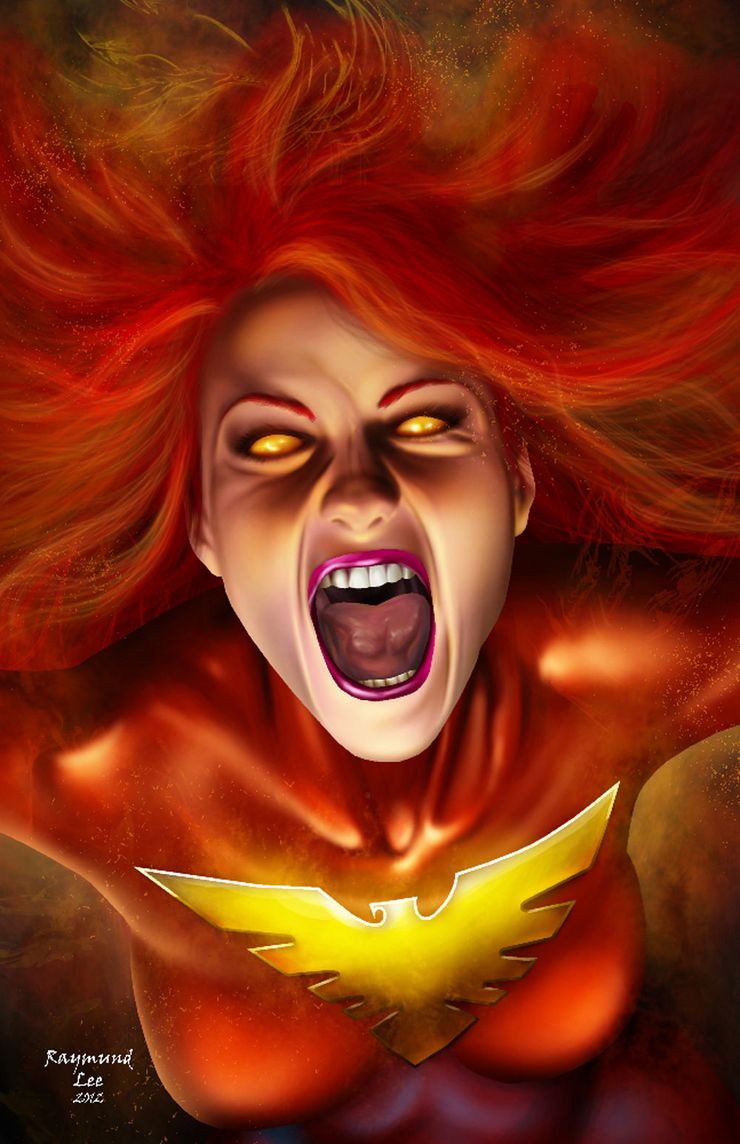 The picture conveys the Dark Phoenix’s raw anger. The bold colors and the traditional costume are mere shells for her all-consuming rage. The Dark Phoenix art piece upholds the bottled-up anger that turned the mighty Phoenix into the senseless, destructive Dark Phoenix. 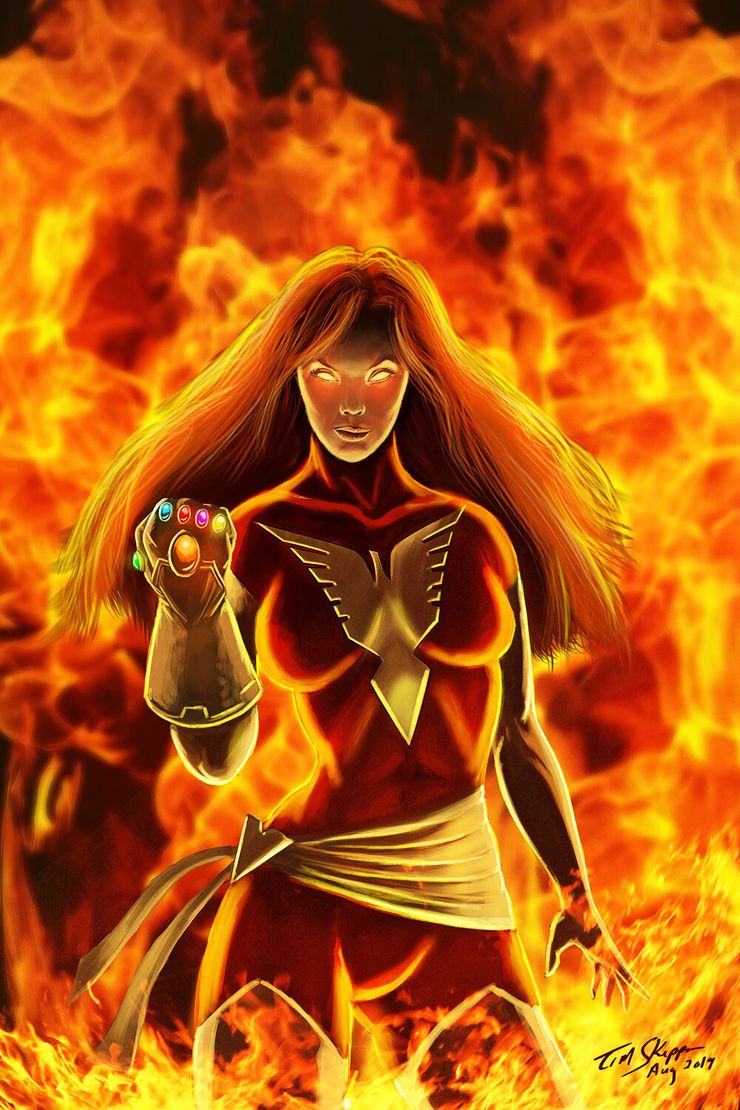 Fans have often theorized and speculated about the most potent MCU antagonist. The Phoenix is much stronger than Thanos, with her ability to cause mass destruction by using the Phoenix Forces. Possession of Thanos’ Gauntlet with all six famed Infinity stones would pave the way for her to become an all-powerful entity.
The Phoenix has always been at the center of discussion of any X-Men or MCU antagonist debate. The layers in her character have left the fans in awe. Would you like any more Dark Phoenix fan art pieces added to the list? Let us know in the comments.