Britney Spears has been enjoying her freedom following her 13-year conservatorship. The singer has been active on social media and continuously shares her thoughts and pictures with her fans. Spears has proved that she still has the spark as her song with Elton John Hold Me Closer earned the top spot on Mediabase’s hot adult contemporary chart. The single was released on 26 August 2022.

Although Spears’ fans have been supportive of her and everything she does, not everyone shares the same opinion about the singer. A celebrity stylist has advised the singer to pay more attention to her fashion and dress properly. The stylist even claimed that the American singer has a “style-less” reputation in the fashion world.

Read More: ‘I lost my mind at that moment’: Britney Spears Claims Her Family Was So Toxic During Conservatorship Nobody Bothered To Tell Her About Her Niece Maddie’s Deadly ATV Accident

Britney Spears Advised to Partner With a Fashion Brand

Britney Spears has been actively sharing pictures and videos on social media. The singer was considered a fashion icon early in her career. She had some iconic red carpet and music video looks. However, for some time she has been sharing videos and pictures in the same types of clothes.

And now a celebrity stylist has taken the responsibility to advise the singer on her fashion sense. A celebrity stylist Amanda Sanders has said that Spears should collaborate with a brand. Sanders further said that it would help her get dressed properly and she would be taken more seriously.

“If she paired up with a luxury fashion house and attended more grown-up events, then they’d dress and style her a certain way,” Amanda Sanders said. She then mentioned that Britney Spears could adapt to their style as Kim Kardashian has done with Balenciaga.

“A lot of other stars have great taste and they become the face of these brands,” Amanda Sanders said. “Kim took Balenciaga to a whole new and different stratosphere, but it always wasn’t flattering on her,” she further added.

The stylist even claimed that Spears is called ‘style-less‘ in the Hollywood style sector. Sanders then shared that Spears “is buying stuff online that looks inexpensive.” She said that Spears thinks she looks cute in them but she doesn’t. The stylist also mentioned that there is no brand attached to her or dressing her at the time.

Amanda Sanders claimed the Grammy winner singer is stuck in a baby doll pop star image. And her traumatic past has made it hard for her to overcome it. She claimed that Britney Spears’ style worked for her in her 20’, but considering her age now “it’s just silly.”

“It’s as if she’s not facing the present and might psychologically be stuck in the past,” Sanders said. She claims that this could be because she “hasn’t had her freedom as an adult.” She also implied that she still dresses and behaves like her old self because she has not identified with growing older.

“I don’t think that’s gone away and in real life, Britney hasn’t identified with growing older.” She also said that Spears is still in good shape, but nothing seems organized with her fashion or appearance.

In November 2021, Britney Spears got freedom for a 13-year conservatorship. Since then she has married her long-term partner Sam Asghari, signed a $15 million book deal, and released a single with Elton John. Although Spears seems to have a great comeback as a singer, her fashion sense seems to be locked in the past.

Read More: Despite Trouble at Home, Britney Spears is Killing It in the Music World – ‘Hold Me Closer’ With Elton John Dethrones Sia’s ‘Unstoppable’ in Coveted Hot Adult Contemporary List 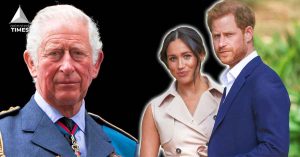