Jennifer Lopez has been having a great year so far, the actress-singed tied the knot with Ben Affleck after the two rekindled their romance earlier this year. The On The Floor singer is known for singing as well as acting and is undoubtedly talented. But she isn’t humble about it at all.

There are a number of tales that have shown that the diva, has got that real diva attitude. From unreasonable demands to mean behavior, the actress-singer has made the news for it all. This old video from The Ellen DeGeneres Show stands as proof of it too.

Jennifer Lopez Screamed at Ellen DeGeneres’ Show When She was Roasted

A five-year-old video from Ellen DeGeneres’s YouTube channel is going viral as news of JLo and her unreasonable demands and mean behavior is making headlines. In the video, the show host is seen asking the Ain’t Your Mama singer about her work and health. To which she replies that she’s “100%” after a break. She also added that it was “a couple of days here and there but it makes a difference as I work literally all the time.”

To this, the host joked back “you work all the time, which is one of the reasons why you can’t keep a steady boyfriend.”

After this there was a significant change in the tone of Lopez’s voice, it went high, and she retorted back, “What is it with you?” She was visibly not happy but had to act polite as she was in front of cameras and a live audience. Also when the host added she cared about her happiness, she was seen replying in a tone dripping with mean sarcasm, “you care about my happiness.”

She was later seen remarking, “I’m playing your little game, I’m being a good sport,” in a rather mean tone.

Related: “She’s an artist, not a prostitute”: Jennifer Lopez Faced Slut-Shaming By Britain’s Television Council After Nearly Baring It All on Britain’s Got Talent

Further, in the video, Ellen DeGeneres is seen pressing the boyfriend matter further asking her about her relationship with Alex Rodriguez, the two had started going out recently at the time when it was confirmed back in 2017. JLo was seen talking in the same high-pitched, annoyed tone even when talking about how her relationship started with Rodriguez as the talk show host kept asking her for details.

It was visible that the Maid in Manhattan actress wasn’t happy and close to snapping at the host but only kept her cool to keep her fake nice image in front of the audience, but the reality is now out in the public. 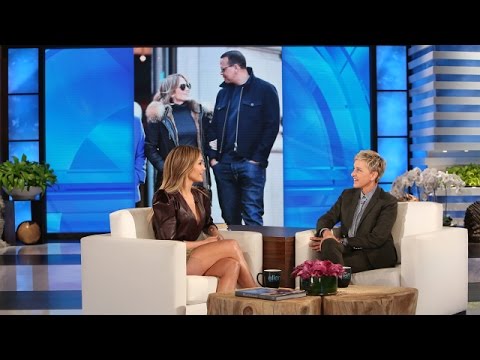