Avengers 4 is scheduled to release in 2019 but there is a young cancer patient who wishes to find out the ending before the film releases in the theatres.

British My Shining Star Children’s Cancer Charity recently posted on Twitter revealing the dying wish of a young girl named Keira, who has been fighting with brain cancer since the last four years and has only 3-6 months left, as revealed by the tweet. 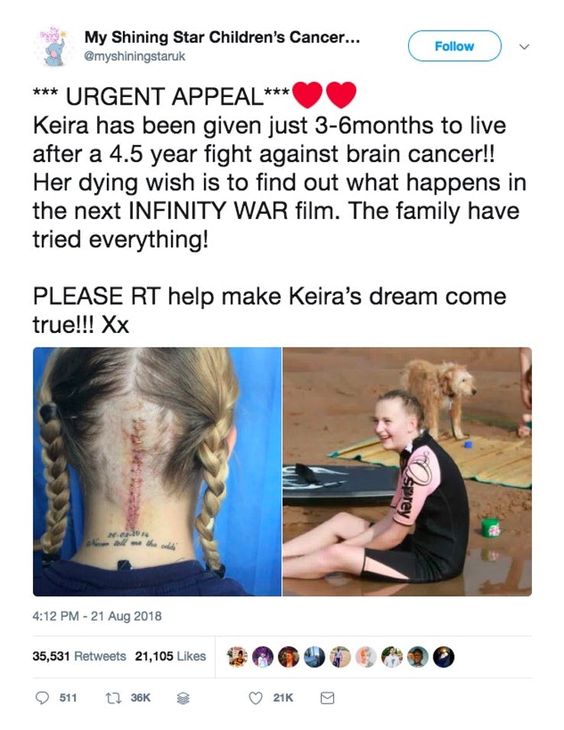 “Her last wish is to find out what happens in the next Infinity War film…. PLEASE RT help make Keira’s dream come true!!”

The post also included pictures of Keira and her surgical scars. The tweet has been retweeted more than 88,000 times until now and has been liked by more than 57,000 users. The message has been shared about 2,000 times on Facebook.

Fans have been tagging MCU stars like Robert Downey Jr., Chris Hemsworth, Tom Hiddleston, Zoe Saldana and Chris Pratt. Marvel is yet to respond to the tweet but we have seen stars visiting sick fans in hospitals before. In 2016, Tom Holland visited the Children’s Healthcare of Atlanta in his Spider-Man costume. Marvel has even contributed $250,000 to Starlight’s Children Foundation in the past.

We all know how important secrecy is for Marvel but if they do reveal the ending or even visit the patient, it would be the kindest gesture ever.